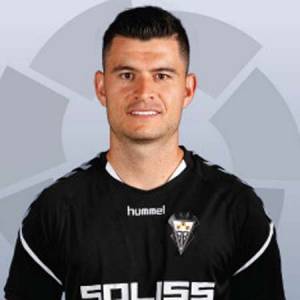 Danny Carvajal is a professional footballer from Costa Rica who currently plays as a goalkeeper for National team of Costa Rica and Tokushima Vortis on a loan from Albacete. The 29 years old footballer has played for many clubs that include Brujas, Saprissa, and San Carlos.

In 2017, Carvajal earned his first international cap with the Costa Rica national team.

Danny Carvajal was born as Danny Gabriel Carvajal Rodriguez on January 8, 1989, in San Ramon, Costa Rica. He belongs to Costa Rican nationality. He completed his primary education at the Deportive Saprissa academy.

Carvajal's current weekly wage is known to be about  €2k and make more than  €100,000 in a year from his salary. He has a net worth of around $500,000. Carvajal often posts the pictures of Elite Sports products on Facebook.

Besides, he might also have endorsement deals with companies and brands.

On July 1, 2011, Carvajal signed a two years deal with AD San Carlos. He spent two seasons where he played 63 games.

On July 1, 2013, Carvajal signed the deal with his former club, Saprissa on a free transfer while his market value was estimated to be €275 thousand.

Carvajal played 126 games before leaving the club in 2017.  Along with his team, Carvajal has been honored with Costa Rican Cup (2013).

On July 2017, Danny Carvajal signed a three years contract with the Albacete on a free transfer while his market value was estimated at €300 thousand.

For the team, Danny Carvajal became the third Costa Rican goalkeeper to represent the club after Luis Conejo and Keylor Navas. On January 16, 2018, Carvajal was sent on loan to Tokushima Vortis until December 2018 after playing for just 2 games.

Danny Carvajal was called up for Costa Rica U-20 team ahead of the 2009 FIFA U-20 World Cup but he didn’t make any appearances.

Aged, 28, Carvajal earned his first international caps with the Costa Rica national team under the coach Oscar Ramirez against Nicaragua.

Carvajal, along with Leonel Moreira and Patrick Pemberton, was called up for a friendly match against Spain and Hungary in November 2017.

Carvajal is a creative goalkeeper, who named as one of the promising goalkeepers in Costa Rica, however, it seems like he is not that creative when it comes to love life.

So far, he is not involved in any kind of love affair and no rumors about his wife, girlfriend and married life. Carvajal is active on social networks like Facebook and Instagram but he hasn't revealed anything about his relationship.

Carvajal is possibly unmarried and seems focused on his career. He stands at the height of 6 ft. and 1 inch and weighs 85 kgs.