Nicolai Jorgensen born as Nicolai Mick Jorgensen is a Danish footballer currently playing as a striker for Feyenoord Rotterdam. 27-year-old Jorgensen playing professional since 2009, also plays for Denmark National Team in 2018 FIFA World Cup under the captainship of Simon Kjær.

Blessed with an enormous salary and endorsement, Nicolai is estimated to be enjoying the net worth of $5 million currently. Alongside career, Nicolia is also blessed with happy married life with his wife Theresa Kofoed Jorgensen. Scroll down for the details on Jorgensen's net worth, salary, and relationship.

Net Worth and Salary of Nicolai Jorgensen

As of 2018, Nicolai is estimated to be enjoying the net worth of $5 million, though he has kept his property undisclosed.

Currently, playing for Feyenoord with the jersey number 9, Nicolai Jorgensen is reported to be earning the annual salary of $1.28 million which splits up to be the weekly wage of $24,500. 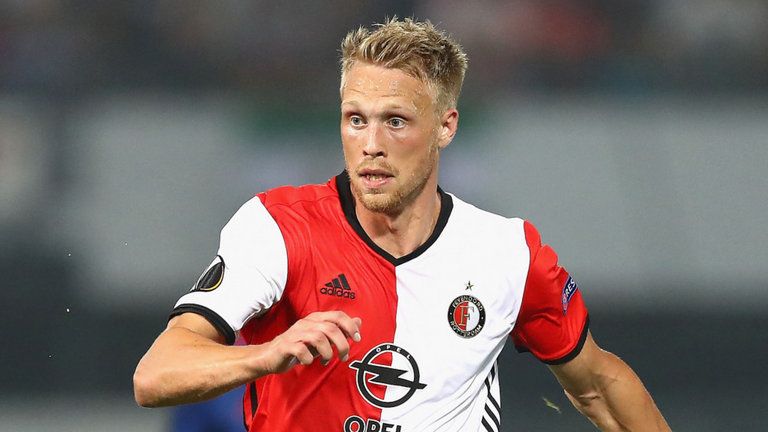 On July 1, 2016, Nicolai Jorgensen signed with Feyenoord from FC Copenhagen on a 5-year deal while the transfer fee was reported to be $3.88 million.

Well, initially in 2009, Nicolai commenced his professional career with Akademisk Boldklub and the career journey took a boost after he moved to Bayer 04 Leverkusen in 2010 on a fee of $1.064 million, where he played for 2 seasons.

Before moving to Copenhagen in 2012, he also played on loan for 1. FC Kaiserslautern. After making 4 seasons with FC Copenhagen, Nicolai signed his career biggest contract with Feyenoord Rotterdam where he becameEredivisie top scorer: 2016–17 scoring 21 goals.

Nicolai Jørgensen scored 21 goals in the Eredivisie this campaign -- He makes our team of the season https://t.co/8tcUCihTz3 pic.twitter.com/lli2FDAzGg

Let's get the summary of Nicolai Jorgensen's career transfer in the table below.

Well, it is reported that Nicolai Jorgensen pockets huge sum of money with his endorsement with Nike, though the detail of endorsement deal is yet to be disclosed.

Alongside being a prominent footballer, Nicolai is also a loveable husband of Theresa Kofoed Jorgensen. Nicolai married his longtime girlfriend Theresa on June 17, 2017, after many years of dating.

The childhood sweetheart of Nicolai, Theresa currently works as a model.

The couple is yet to share children. Maybe the happy news will be out soon.