Danil Vladislavovich Krugovoy, famously known as Danil Krugovoy, is a Russian professional footballer signed to FC Zenit Saint Petersburg as a left-back. Krugovoy has represented his youth national teams in several age levels from U17 to U21; he is on the list of Athletes who have won the Russian Premier League 2020-21 from Zenit Saint Petersburg.

Gatchina, Leningrad Oblast, Russia native Danil Krugovoy was born on 28 May 1998 under Gemini's star sign. The twenty-two years old hold Russian nationality and is of white ethnic background. He stands 1.76 m (5 ft 9 in) tall and weighs over 76Kg.

How Much Is Danil Krugovoy's Net Worth In 2022? (Salary & Market Value)

Krugovoy has played professional football from a young age; as he has represented his Russian youth national team in various age levels, he might have added some good earnings to his net worth to date.

As playing for Zenit Saint Petersburg since 2016, Krugovoy earns around £124,800 per year, which is £2,400 per week; he is one of the well-paid players for the club. Danil Krugovoy is expected to have approximately an estimated net worth of $1 million.

Zenit's left-back to date has not disclosed the information regarding earnings through such deals, and the detail regarding his cars and house remains under the radar.

It is unknown if Zenit's left-back Krugovoy is married or not. There is no information regarding his love life in the media. Furthermore, Krugovoy is active on Instagram but has not shared pictures with any girls.

Must say, Krugovoy has maintained his personal life as secret as possible but might be dating in private and waiting to flash out to his fans. Kurgovoy is close with his mother during his vacations; he loves spending quality time with her.

Also, know about Clifton Miheso's Personal Life and Net Worth.

Danil Krugovoy made his professional debut for the Russian national under-17 football team at the 2015 UEFA European Under-17 Championships; he also played in the 2015 FIFA U-17 World Cup. 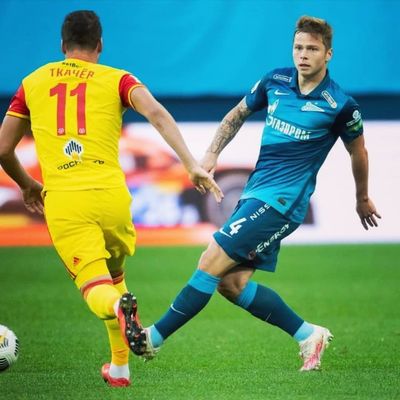 Zenit's left-back played for the World Cup qualifier match against Cyprus and Croatia, and he is on the list of athletes to win the Russian Premier League 2020-21 with Zenit Saint Petersburg.