The American international Dani Marie Rhodes, aka Dani Rhodes, is a professional soccer player who competes in the Deild Karla, the Iceland top-tier league. She serves as a forward for Proturr Reykjavik. Dani was committed to playing his college career for the University of Wisconsin Badgers from 2016 to 2019.

On April 8, 1998, the former Chicago Red Stars star player was born in Waukesha, Wisconsin, USA. Currently, the footballer is just 24 years old, and her sun sign is Aries. For your information, Rhodes's birth name is Dani Maria Rhodes. However, she is also known by the name Dani Rhodes Watt. Indeed, Watt is the surname she got from his husband. Moreover, the footballer has a height of 5 feet 5 inches or 1.65m and weighs around 51kg.

Know About Her Family Members And Early Life

Dani Rhodes, the two times State Girls player of the year, is the daughter of her parents, Dan Rhodes and Deann Rhodes. Both of her parents are of American descent. More her father, Dan, is also a Wisconsin-Eau Claire University graduate. Dani is also the sister of her two supportive brothers, Dylan and Drew. Her family cheering up during her graduation day  SOURCE: Instagram

Concerning her early life, she went to Waukesha West for her high school studies and later joined the University of Wisconsin for higher studies.

Dani Rhodes's Net Worth And Annual Pay At Reykjavik

Dani, the 24-year-old player, is in the early phase of her career. So presently, she is focused on her footballing life. Before making her presence in the Iceland league, she played in the NWSL, earning between $22,000 to $52,500 playing for Red Stars. Notably, the paychecks Rhodes gets from Proturr are still yet to be transparent. Meanwhile, the player is enjoying her best life with her husband.

Not to mention, Dani's husband is an NFL Player, and combined with her husband's net worth, it would be astronomical. However, her net worth is estimated to be $100,000. Not to mention, she is a huge travel lover. We may eye her numerous traveling photographs on her Instagram.

Dani is living a happy married life with her husband. Rhodes exchanged her wedding vows with Trent Jodan Watt. Their love story started in 2015 when they, unfortunately, met each other at a sporting event. A year later, they officially expressed their relationship with the masses via their respective social media outlets. After dating for five years, Trent proposed to Dani on July 9, 2021. 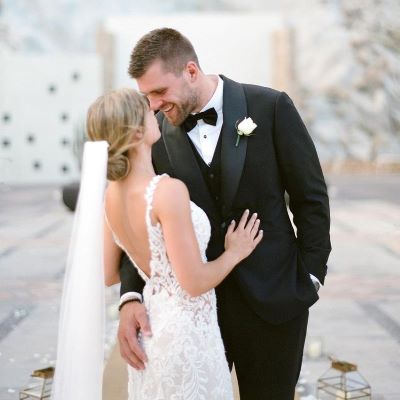 Dani with her husband Trent on her Wedding day  SOURCE: Instagram

Exactly a year later, on July 9, 2022, the pair exchanged their marital vows. More, both of them lit up their Instagram with their wedding photographs, which fans loved. So far, the couple has not welcomed a baby.