3× NBA champion, Dan Craig is an American professional basketball coach currently serving as associate head coach for the Los Angeles Clippers of the National Basketball Association (NBA). He started his career as an assistant at Miami Heat (2012-2015), Sioux Falls Skyforce (2015-2016), and Miami Heat (2016-2020).

Chelmsford, Massachusetts native, Dan Craig was born on 9th June 1980, under the star sign Gemini. The forty years old holds an American nationality and is of white ethnic background. Further, he is a graduate of Plymouth State University, where he graduated with a degree in marketing.

The NBA publishes the salaries of athletes and head coaches but tends to be secretive about the pay of assistant coaches. However, the report suggests assistant coaches in the league have an annual average salary of $300,000 to $1 million depending on their experience and success.

Craig, who serves as associate head coach of Los Angeles Clippers of the NBA is assumed to make $0.5 million per annum as salary. As of 2021, his net worth is $1 million.

Dan Craig is a married man. He tied the knot with Jackie. The couple shares two sons: Brodie and Will and currently reside in Coconut Grove. And that's the only information published in media about Craig's personal life.

Los Angeles Clippers' associate head coach is nowhere to be found on socials such as Instagram and Twitter. Dan Craig has maintained his personal life low-key.

Besides, there is not much information available about his other family member, however, Craig's mother and twin sister sometimes appears during games.

Dan Craig served as a graduate assistant at Bloomsburg University prior to joining the Miami Heat as an intern in the video department for the 2003–04 season. In 2004, he became the Heat's assistant video coordinator and later two years was promoted to video coordinator. In 2012, he was appointed as an assistant coach by Heat.

On 25th September 2015, Craige was hired as the head coach of the Heat's NBA Development League affiliate team, the Sioux Falls Skyforce. On 29th January 2016, he was named 2016 NBA D-League All-Star Game head coach and NBA D-League Coach of the Year. That season,  Sioux Falls Skyforce also won the league championship with a 2–1 Finals series victory against the Los Angeles D-Fenders. 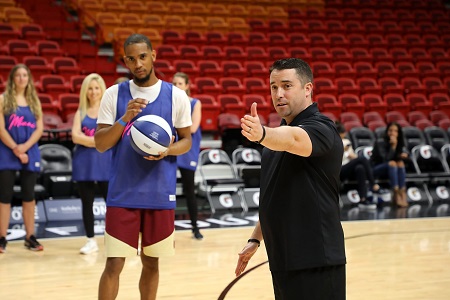 On 16th November 2020, Craig was appointed as an assistant coach for the Los Angeles Clippers under head coach Tyronn Lue.