Dan-Axel Zagadou was born on June 3, 1999, in Creteil, France. He is very private about his personal life. Dan-Axel holds French nationality and is of Ivorian descent. Talking about his physical appearance,e Zagadou stands six feet and six inches tall and weighs 90 kg. 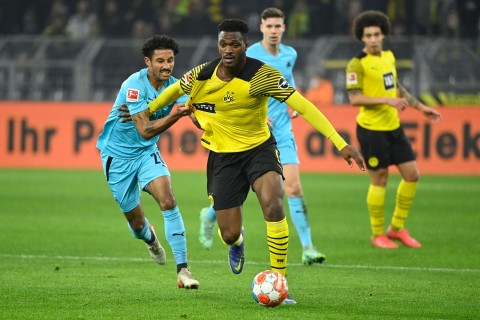 Dan-Axel tries to pass through the defender in a game SOURCE: Bundesliga News

Dan-Axel is very early in his career and will be adding millions in the future. Mats Hummels and Thomas Meunier are the highest-paid player on the team with an annual salary of £8,528,000.

Who is Dan-Axel Dating? Know About His Girlfriend and Relationship Status

Dan-Axel is very private about his love life. The German football player has close to 200k in his Instagram profile but has not posted a single photo in his timeline. He could be single or dating and waiting for the right time to open up about his relationship status. Zagadou likes to spend his free time with his friends and family.

Dan-Axel started training with Creteil in 2006. He represented the club in numerous divisions and moved to Paris-Saint German in 2011. He trained with the club and became a vital member of the club. Zagadou made his senior team debut with the PSG B team in 2016. He appeared in nine games with the club and moved to Borussia Dortmund in June 2017 on a free transfer and signed a five-year contract.

Zagadou played with the Dortmund II team in four games and has been a regular club member since then. His contract expires at the end of the 2022 season, and many big clubs are interested in him.