Argentine professional footballer Cristian Ansaldi plays as a full-back for Italian club Torino, on loan from Internazionale and the Argentina national team. He was named in Argentina's 23 man squad for the 2018 World Cup in Russia.

Cristian started his football career with the club Newell's Old Boys in 2005. He has married to Lucila Ahumada, with whom he shares three children.

Cristian was born on 20 September 1986 in Rosario, Argentina with the birth name Cristian Danie Ansaldi under the birth sign Leo. However, he holds both Italian and Argentine nationalities and belongs to Mixed ethnicity. He was so much fascinated by the football since he was a child. He used to play local area football when he was a child.

At the age of 19, Ansaldi first started his professional career, playing in the Newell's Old Boys as the first team in 2005. He joined the club as in a regular basis. During the three seasons until 2008,  he successfully appeared in 28 matches scoring 2 goals. After that, he performed for many clubs.

After playing for Newell's Old Boys, Cristian appeared in the Rubin Kazan club on Jan 2008.  Being in the club, Cristian helped the club in winning the Russian Premier League in both 2008 and 2009.

At the end of the 2013-14 season, Ansaldi had already played in 170 matches with scoring three goals.

After playing a long time for the Rubin Kazan, Ansaldi left the club and joined the Zenit Saint Petersburg in 2013 in which he performed just for a very little duration.

Cristian was transferred to Atletico Madrid on loan for the La Liga season on 1 August 2014. The defender made his competitive debut on 19 August against Real Madrid in the 64th minute with the replacement of Guilherme Siqueira in the 2014 Supercopa de Espana which resulted in a 1-1 draw.

After performing for Atletico Madrid, Ansaldi made a contract on loan with Geona for the 2015-16 season. However, the transfer was only made permanent when the club activated the 4 million EUR clause on 31 May 2016. However, Geona could not make the payment to Zenit which enabled Zenit to take all the rights. But finally, his transfer to Geona was finalized on 29 July 2016.

Ansaldi joined Internazionale on a permanent deal from Genoa on 30 July.  However, he played his first game for the team against Sparta Prague resulted in a 3-1 loss on 29 Sep 2016 in the first match of 2016-17 UEFA  Europa League Group K. 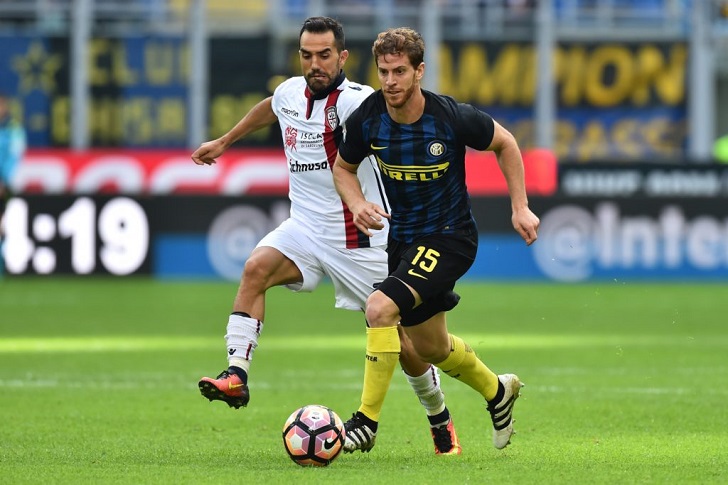 He concluded his first Internazionale season by appearing 26 times in all competitions. During the match against Palermo, he was provided his first and only assist in the 2-2 draw at Torino. Before joining Torino, he has also appeared as an unused substitute in Inter's first two 2017-18 Serie A matches.

Christian has successfully established himself on the international stage as well. On 14 Nov 2009, he was called for Argentina to play a friendly game against Spain.

Ansaldi is a professional footballer which enables him a good amount of money as a salary. He has contracted with many clubs which helped him to collect an impressive net worth estimated at over $5 million.

Cristian Ansaldi has married Lucila Ahumada. It's been four years that the couple had married and they don't have any divorce rumors. The couple shares three children, two daughters and a son.

Besides, Ansaldi was arrested for slamming the car door on policeman's hand in 2015. He was alighting his car, attempting to close the door but caught the policeman's hand with the door. Immediately, he was taken to the custody.

Moreover, he spends his much time practicing football.  He can stand at the height of 5 feet and 11 inches. He has got a weight of 76 kgs.