2016 WNBA draftee, Courtney M. Williams currently signed to the Connecticut Sun of the Women's National Basketball Association (WNBA). After her high school basketball career at Charlton County High School, she enrolled at the University of South Florida and played for the college team.

A native of Folkston, Georgia, Courtney M. Williams was born on May 11, 1994, under Taurus. The 5 ft 8 in tall holds an American nationality and belongs to the Afro-American ethnic background.

No. 10 – Connecticut Sun Point guard, Courtney M. Williams is currently under four years with the team. In the 2019 season, her salary is reported $59,718, where Jasmine Thomas, Alyssa Thomas, and Shekinna Stricklen are the highest-paid athlete. Earlier this season, she took home $52,552.

On 20th November 2019, she announced that she will be joining XFL as the Manager of Digital Content for the league starting in December. According to the source, the average digital content manager salary in the U.S. is $64,367 per annum.

Analyzing her contract and earnings, Williams' net worth in 2019 is approximately $0.2 million.

Besides, she recently went to Bali for vacations.

Courtney M. Williams is an openly lesbian who support LGBT rights. During her freshman year she dated boys but growing up she discovered new feelings. By her sophomore year, she started dating girls.

Further, she also confessed her sexuality to her parents and was okay with that. She shared, "Once I told my mom and dad, things were good. They were like, Really? OK. And my dad was like, Just as long as you still give me some grandbabies!”

In 2018, she introduced Kylah Gibre to the world as her sweetheart. 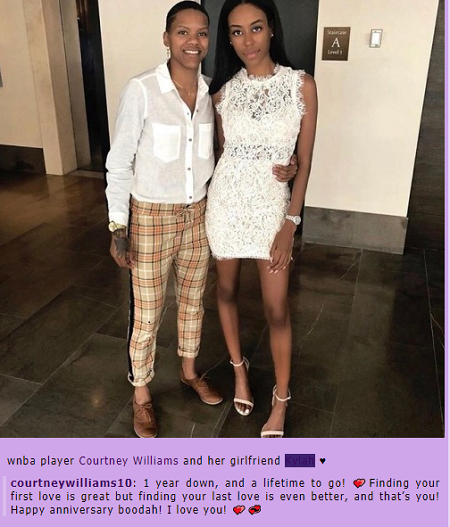 Courtney was born to Michele and Donald Williams and was raised alongside her sister, Doniece Williams. 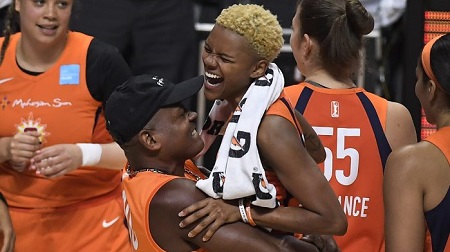 On top of that, Courtney shares a strong bond with her father. Her father is a constant presence at WNBA games. Whenever she scores, he holds an oversize cutout bearing his daughter’s face high above his head for all the crowd to see.

In the 2016 WNBA draft, the Phoenix Mercury selected Williams as the eighth overall pick. After appearing in a handful of games for the Mercury, Williams was traded to the Connecticut Sun on June 26, 2016.