Corey Crawford is a Canadian professional ice hockey player who was drafted #52 by the Chicago Blackhawks in the 2003 NHL Entry Draft. He played for the Midget AAA Gatineau Intrepides and for the Moncton Wildcats of the Quebec Major Junior Hockey League. He made his NHL debut for the Blackhawks in 2006 and has played in Chicago his entire professional career.

Corey Crawford was born on December 31, 1984,  and grew up with his parents Trevor Crawford and mother Sylvia Crawford at Chateauguay, Montreal, Quebec and being native Crawford speaks both French and English fluently.

Since childhood, Corey dreamt of becoming a professional NHL player and he went on to spent his pre-junior career playing for the Midget AAA Gatineau Intrépides, before spending his junior career with the Moncton Wildcats of the Quebec Major Junior Hockey League (QMJHL).

Crawford was the goaltender for the Wildcats in the 2003–04 QMJHL playoffs, when they ousted the Rimouski Océanic in the semi-finals to advance to the President's Cup final, but lost that series to the Gatineau Olympiques.

Achievements and the Net worth of Crawford

The Canadian professional ice hockey player is estimated to have a net worth of $12 million in 2018 according to various sources.

The career of Corey Crawford

Making his debut with the Blackhawks on January 22, 2006, Corey made seven saves and did not allow any goals against Minnesota Wild. He recorded his first career win and the shootout against the Anaheim Ducks on March 5, 2008.

Corey was re-signed by the Blackhawks on July 21, 2008. Crawford made his first Stanley Cup playoff appearance on May 24, 2009, in the second period of the Western Conference Finals against the Detroit Red Wings, replacing Cristobal Huet. He stopped six of seven shots.

After starting the year off strong, Crawford struggled for a majority of the season and was often benched in favour of veteran backup Ray Emery, who played extensively down the stretch. Crawford was confirmed as the starter for the Blackhawks heading into the 2012 Stanley Cup playoffs.

He became the first Blackhawks goalie to win at least 30 games in back-to-back seasons since Ed Belfour did it in the 1992–93 and 1993–94 seasons. On September 2, 2013, Crawford signed a six-year, contract extension with the Blackhawks through the 2019–20 season.

Crawford was selected to play in the 2015 NHL All-Star Game, one of six players selected via fan-vote (the others being his teammates Duncan Keith, Brent Seabrook, Patrick Kane, and Jonathan Toews.

On December 1, 2017, the Blackhawks placed Crawford on IR after he sustained a lower-body injury the previous night. Crawford returned after missing three games but sustained an undisclosed upper-body injury after playing in seven games. The Blackhawks stated Crawford would be out indefinitely but were hopeful that he could return before the end of the season.

Corey Crawford is 1 of 270 people on AlphaLife with the first name Corey and is also a member of people who are 32 years old, celebs who are known for being Hockey Players, and famous figures with the birth sign of Capricorn. 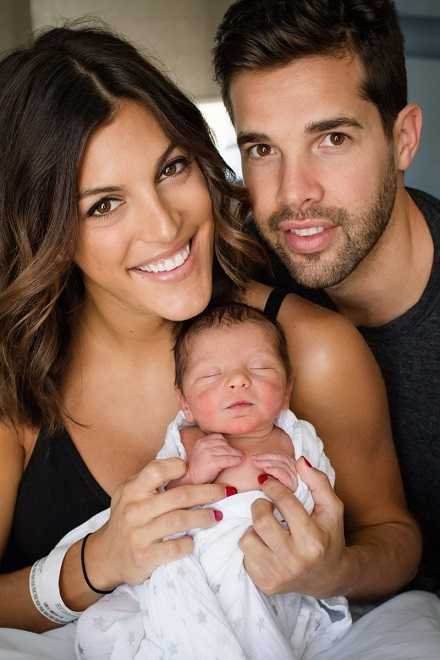 CAPTION: Corey and Kristy on the arrival of their son Cooper. SOURCE: Twitter

Corey Crawford and his longtime girlfriend Kristy welcomed their first son, Cooper Crawford, according to the Blackhawks official Twitter feed on September 5, 2017. The father of the newly born baby boy will have some time before the Hawks open training camp on September 15.