Bakersfield, California native, Corbin Burnes was born on 22nd October 1994, under the star sign Libra. He is the son of Rick and Kandi Burnes. The twenty-seven years old holds an American nationality and is of white ethnic background.

How Much Is Corbin Burnes Net Worth In 2021?

As of 2021, Corbin Burnes' net worth is approximately $2 million.

Corbin Barnes is married to Brooke Charlotte Terrio Burnes. A proud husband, the Brewers' pitcher has written, "Married to my best friend @brookeburnes" on his IG bio. The couple tied the knot on 14th November 2020. 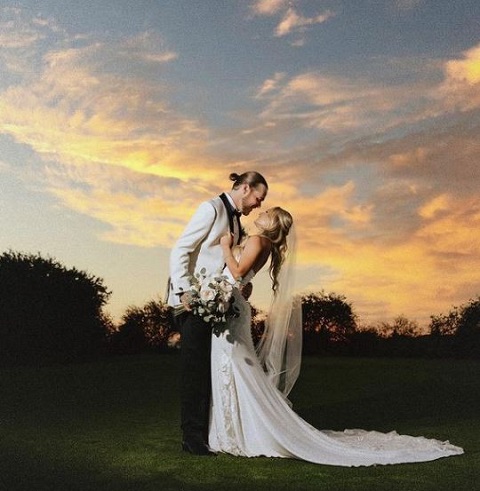 In September 2021, the couple annouced they are expecting baby via Ig Post. The caption reads, "New member coming to the Crew Spring Training 2022!"

His spouse Brooke was born in California as the daughter of Nancy McDermott. She is a graduate of the University Of San Diego with a Bachelor Degree in Accounting. As reported, Mrs. Burnes is working as an Assurance Associate at RSM US Consulting firm. Brooke is a former fitness trainer and instructor at TERRIO Physical Therapy-Fitness Inc.

As a junior at college, he posted a 9–2 record with a 2.48 ERA in 16 starts. Following that season, Milwaukee Brewers picked him in the fourth round of the 2016 Major League Baseball draft.

In 2016, Burnes made his professional debut with the Arizona League Brewers. Later, he was promoted to the Wisconsin Timber Rattlers.

The following season, he played for the Carolina Mudcats. After recording a 1.05 ERA after ten starts, he was promoted to the Biloxi Shuckers. He concluded the season with a combined 8–3 record and 1.67 ERA between both teams.

After the season, he was  named the Brewers' minor league pitcher of the year.

On 8th July 2018, he was called up to the majors for the first time and made his major league debut later two days.

Burnes announced that Burnes would begin 2019  in the starting rotation. He struggled in that role recording 11 home runs across his first 3 starts. Later, he moved back to to the bullpen where he compiled a 9.00 ERA through 26 appearances.

On 13th May, hed recorded the most strikeouts to begin a season in MLB before issuing a walk, with 58, surpassing the previous record held by Kenley Jansen.