Collin Martin is an American soccer player who is currently signed to the San Diego Loyal in the USL Championship. The midfielder previously played for the D.C United and Minnesota United FC in Major League Soccer (MLS) and for Hartford Athletic and Richmond Kickers in the United Soccer League.

Chevy Chase, Maryland native Collin Martin was born on 9th November 1994, under the star sign Scorpio. The twenty-five years old is an American by nationality who belongs to the white ethnic background.

Collin Martin is currently playing for the san Diego Loyal of the USL Championship. According to the source, the average salary for the USL is $87,604, per year ranging from $45,699 to $109,948.

Furthermore, Collin is endorsed by Adidas. As of 2020, his net worth is approximately $0.5 million.

Martin came out publicly as gay on 29th June 2018, being the only active male professional soccer player to be openly gay at the time. 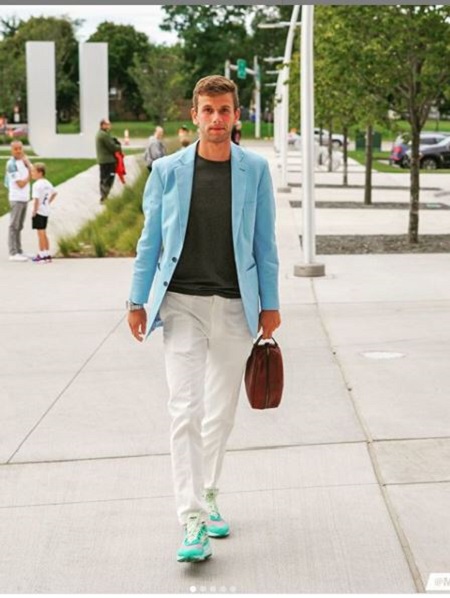 Collin Martin talks about the pressures of being LGBT in football, which he says have become stronger since he came out. At the age of twenty-one, he started dating his boyfriend. At the time, they were long-distance and his boyfriend was visiting for the weekend. Also, he brought his partner at the time to a team party.

Martin is a fourth of five children born to Roberta and Gerard Martin of Chevy Chase, Maryland. Raised in an observant Episcopalian family, Martin, recalls, “A PE teacher told my parents I would be a pro soccer player. I loved it. I was obsessed. at his 10”

After joining D.C. United 2013, Martin transferred his credits from Wake Forest University to George Washington University. He attended part-time for four years, and online for a fifth from Minnesota, and graduated in 2019 with a degree in history.

On 10th July 2012, Martin signed with D.C. United s a homegrown product, becoming the team's sixth homegrown signing. On 3rd August, he made his D.C. debut against the Montreal Impact in a 3-1 win. On 17th July 2013, he was sent out on loan to their USL Pro affiliate, the Richmond Kickers.

In January 2017, Martin was traded to Minnesota United FC in exchange for a fourth-round pick in the 2018 MLS SuperDraft. On 25th March, he made his debut in a 5-2 loss at the New England Revolution. In October 2019, he was released from the team.

In February 2020, Martin was signed by San Diego Loyal.