Christopher Nkunku is a French rising football star who is currently playing Bundesliga side, RB Leipzig, as a winger. At the international level, he has played for France U16, U19, U21, and U21 tea, He is yet to make his senior debut for his nation.

Lagny-sur-Marne, France native, Christopher Nkunku was born on 14th November 1997, under the star sign Scorpio. The twenty-three years old holds French nationality and is of Congolese descent. He stands 1.75 m (5 ft 9 in) tall.

How Much Is Christopher Nkunku's Net Worth In 2021? Salary & Market Value

Christopher Nkunku's current market value is €43 million, updated on 9th June 2021.
An Adidas athlete, his net worth is approximately $3 million as of 2021.

Is Christopher Nkunku In A Relationship?

Only have eyes for football, Christopher Nkunku is solely into his career rather than anything else. To date, no media has reported about his girlfriend. A low-key lover, he is believed to be single. 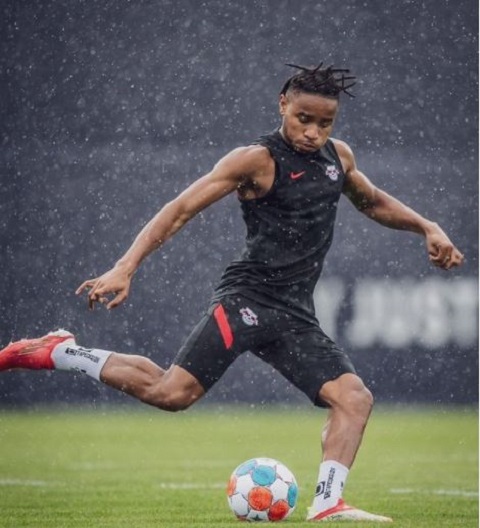 Further, the attacking midfielder has earned 525k followers on his IG which goes by c_nkunku.

Christopher Nkunkun began footballing in 2003 at AS Marolles where he remained until 2009. Then he played a season with Fontainebleau. In 2010, he joined PSG.

On 8th December 2015, Nkunku made his professional debut in the UEFA Champions League  Shakhtar Donetsk, replacing Lucas Moura after 87 minutes in a 2–0 home win. His first goal for PSG came on 7th January 2017  in a 7–0 home win against Bastia in the Coupe de France. Before leaving the club,

He made overall 55 game appearances with 8 goals.

On 15th September 2021, he scored a hat-trick for Leipzig in their 6-3 defeat against Manchester City in a UEFA Champions League Group A Matchday 1 match.

Born in France, Nkunku is of Congolese descent. A youth international for France, he played in U-16, U19, U20, and U21. With impressive performances for PSG, there had been calls for him to be called up to the senior national team.