Christiana Barkley was born with a silver spoon in her hand. Christiana is better-known as the daughter of an American former professional basketball player who is an analyst on Inside the NBA, Charles Wade Barkley. Barkley completed her studies in journalism and is presently pursuing her career in the field.

Christiana Barkley was born in 1989 in New York City, New York. She is the only daughter born to Charles Barkley and Maureen Blumhardt. Her father is a well-known American star, and her mother spends most of her time in charity. After graduating from High School, Barkley enrolled at Villanova University but later transferred to Columbia University.

Christiana is a married woman living a happy married life and her husband. Barkley walked down her wedding aisle along with Ilya Hoffman on March 6, 2021, in Scottsdale, Arizona. They had been dating for some time before walking down their wedding aisle. As per sources, The duo first met each other at a bar while watching a Villanova basketball game. 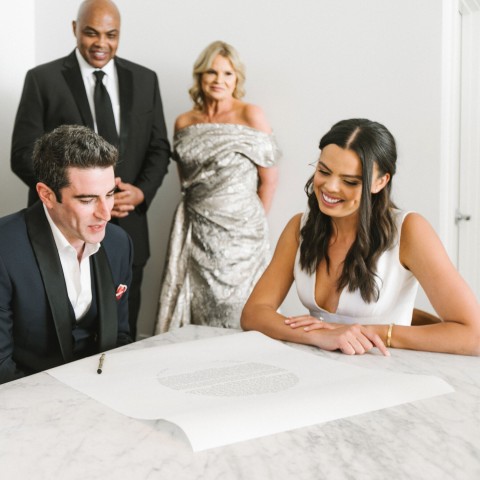 The wedding day photo of Christiana with her husband and parents SOURCE: New York Post

Christiana and Ilya had a private wedding ceremony where they had invited only a few members from both the families and some close friends. Rabbi John Linder officiated the wedding, who leads Temple Solel, a Reform congregation near Scottsdale.

Christiana Barkley is very much private about her economic life. She has not shared a word about her earnings, net worth. Christiana must be enjoying a lavish lifestyle through her father's successful career.

Charles Barkley has an estimated net worth of more than $50 Million. He has earned most of his net worth through his career in the NBA. Barkley has been working as a sports analyst for a television show. Barkley must be making a six-figure amount throughout his career. He will be adding a huge sum to his net worth.

Christiana completed her formal education in journalism but has yet to join any channel. Her father, Charles Barkley, started playing basketball in his High School days. He played basketball for Auburn University in NCAA. In the 1984 NBA draft, the Philadelphia 76ers drafted him in the First round overall 5th pick.

Charles was named into the NBA All-Rookie Year in the 1985 season. In the Following seasons, He was named to the All-NBA Second Team. Barkley was named into the All-NBA First Team five times along with Michael Jordan. In 1991, He won the NBA All-Star Game MVP Award. In 1993, Charles won the Most Valuable Player of the season. The player played for the Philadelphia 76ers until 1992 and moved to Phoenix Suns for a four-year contract.

Charles transferred to Houston Rockets in the 1996 season and announced his retirement in 2000. Philadelphia 76ers retired his No.34 Jersey. Barkley was part of the Gold medal-winning team in the 1992 and 1996 Olympic Games held in Barcelona and Atlanta.