If you love watching Fox Sports Channel, then Chris Broussard must not be a new name. Chris is a well-known American sports analyst and a commentator for Fox Sports 1 and Fox Sports Radio. Broussard is most famous for covering the NBA. Before working with Fox, He worked with The New York Times, ESPN The Magazine.

Chris Broussard was born Christopher Dana Broussard on October 28, 1968, in Baton Rouge, Louisiana. He is the son of Cheryl Broussard and Edward Broussard. Chris holds American nationality and is of African-American descent. Broussard's family moved to several places around the states due to his father's job as a personnel manager for Traveler's Insurance Co.Chris graduated from Holy Name High School in Cleveland and then enrolled at Oberlin College.

Chris was an avid basketball player in his High School. He was a standout football and basketball player at Holy Name; Broussard was inducted into the school's Hall of Fame in 2016. He played for his college Men's basketball team as a point guard. Broussard graduated with a bachelor's degree in English and started his career as a sportswriter for The Plain Dealer.

After working with the team for more than four years, Chris moved to the Akron Beacon Journal. He started to cover the NBA and spent two-and-a-half seasons with them as the Cleveland Cavaliers beat writer. The New York Times hired him as their sports writer to cover the Jersey Nets and the New York Knicks. In September 2004, Broussard joined ESPN The Magazine. After joining, ESPN, His working area expanded, and he began making regular appearances on ESPN as an NBA insider and analyst.

Chris spent three years as a sideline reporter for nationally-televised games on ESPN and ABC. In 2013, Broussard rose to fame for criticism he made on the ESPN Outside the Lines program about NBA player Jason Collins. After spending more than a decade with the team, Broussard joined FOX Sports 1. Since 2018, He has been working as the co-host of a daily national radio show called The Odd Couple.

Chris is a married man living a happy married life along with his wife and their children. Chris tied his wedding knot with his longtime girlfriend, Crystal Broussard, in 1998. The duo has become successful in maintaining a private lifestyle. 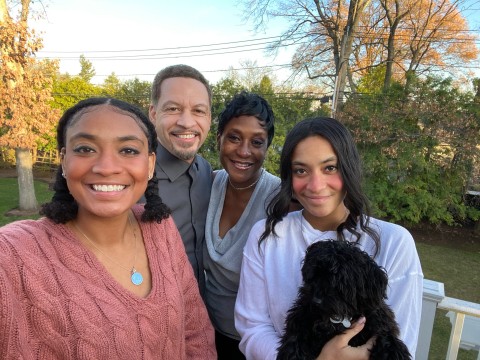 CAPTION: Chris along with his wife and their children SOURCE: Twitter @Chris Broussard

Chris and Crystal are the proud parents of a twin daughter named Alexis and Noelle. It's been more than two decades of their marriage, and there have been no rumors of the couple having ups and downs of their marriage life.

Chris Broussard has an estimated net worth of more than $1 Million. Chris has been making a handsome amount from his successful career as a sports journalist. The journalist has not shared a word about his salary in public. The average salary of a sports journalist working in the states is more than $49,000. He is at the peak of his career and shall be making millions in the days to come. Chris bought a house for $983,000 in 2005.