South Korean footballer Cho Yu-min whose prominent position is a Centre-back or Defensive midfielder, currently plays for the club Daejeon Hana Citizen. He is also a national footballer who was a part of the South Korea U-23 national team that participated in the 2018 Asian Games that won the gold medal. In the 2021 season, Yu-min made 18 appearances for his club and played 1,499 minutes.

The 6 feet tall player wears jersey number 20 at his current club. Apart from being known for Yu-min's professional work, Yu-min made headlines on the internet on January 18, 2022, when it was announced that he was going to marry popular K-pop group T-ara's ex-member Park So-Yeon in November 2022. The lovely couple has been in a relationship with each other for more than two years.

Yu-min has been playing football professionally for quite a long time now. As for his education, he went to Cheongju Daeseong High School, where he was also a part of the football team from 2012 to 2014. And from 2015 to 2017, he attended Chung-Ang University.

His senior career started at Suwon FC in the year 2018. With the team of Suwon FC, he played until 2021. Yu-min was selected in the starting XI in 16 of these appearances across their 19 fixtures and joined as a substitute in two events. Furthermore, he played 24 K League 2 games the previous season for Suwon, scored two goals and provided one assist. Representing Suwon FC, he made his appearances in various other games leading them to win some titles too. Apart from that, Yu-min has also played for the South Korean national team, and most notably, he participated in the 2018 Asian Games representing the South Korea U-23 national team. For your information, they also won the gold medal.

Yu-min is a professional footballer who has played for multiple teams accumulating a decent sum of money from his profession. According to Transfermrkt, Yu-min's current market value is €625Th, and the highest was €675Th on June 22, 2021.

For your information, a South Korean footballer has an average salary of $24149.89 annually and $11.61 per hour. So, from his current team, Yu-min might be earning in the same range. But due to the absence of data, we can't share the details about his income. No doubt, Yu-min enjoys a quality life. Furthermore, the professional South Korean footballer flaunts his lifestyle via his Instagram handle. His IG bio also shows that he is currently working with multiple brands, including Squaresports. In the same way, he has also collaborated with some brands which might have paid him a fair sum.

Love Life: Who Is Yu-min Girlfriend or Wife?

Coming into his personal life, Yu-min leads a happy life with his partner, Park So-Yeon. The lovebirds have been in a relationship for more than two years, and on January 18, 2022, the pair revealed that they would marry in November when Yu-min's season ends.

It is reported that the professional footballer is nine years younger than his partner. The duo often shares cute pictures on their social media handles. Talking about the profession of Yu-min's partner, So-Yeon is a renowned South Korean singer and actress. 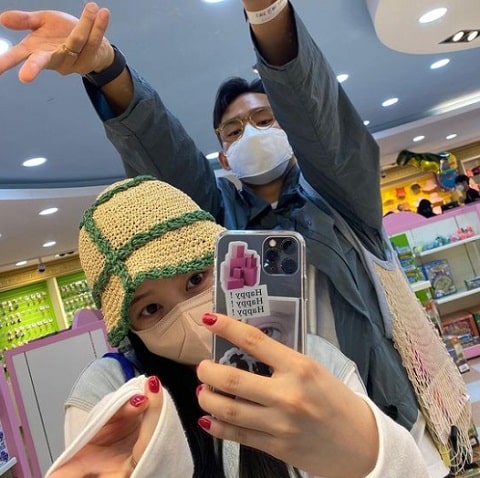 Since 2009, she has been actively engaged in this field and has gained huge fame in this industry. Se-Yeon debuted as a member of the girl group T-ara in July 2009. Later, the group went on to become one of the best-selling girl groups of all time. And in 2021, she debuted as a solo artist. She has also taken home some awards, including the Gold Award in 2015 in the Chin National Singing Competition.

Park Se-Yeon was born on October 5, 1987 in Andong, North Gyeongsang, South Korea. As of early 2022, she is 34 years old. Her birth name is Park In-Jung, but she legally changed her name to Park So-Yeon. Talking about her education, she studied at the prestigious Anyang High School of Arts.

Initially, she worked with SM Entertainment. Later, she began working with T-ara, a South Korean girl group formed by MBK Entertainment in 2009, which now consists of Qri, Eunjung, Hyomin and Jiyeon.

Cho Yu-min was born in 1996, and his birthday falls on November 17 every year. At the time of this writing, Yu-min is 25 years old. Furthermore, Yu-min is a native of South Korea. So, he holds South Korean nationality and peaks at the height of 6 feet 0 inches. Moreover, Yu-min is a family person who loves spending time with them during his spare time. However, he is also of a private nature and does not expose anything in the media as Yu-min is highly aware of his privacy. No doubt, Yu-min's parents have a prominent role in his success.

Yu-min is an active social media user. Since 2016, he has been actively using Instagram, where we can follow him under the username @c.yuum_. As of early 2022, Yu-min has garnered over 24.3k followers on his Instagram handle.

Some Facts About Cho Yu-min