As a Left-wing, Charles Hudon reportedly earns around $650,000 as his yearly salary from Montreal Canadiens and has an estimated net worth of over $300,000. As per his relationship status, he is married to his beautiful wife, Krystel Gauvin.

According to the reports about the marital status of Charles Hudon, he is a married man. He is married to his beautiful wife Krystel Gauvin. Further, the beautiful couple dated for quite a long time and got hitched in August 2018.

Despite the busy schedule, Charles Hudon spends quality time with his family and keep going on vacations from time to time.  Further, the couple has two babies. Additionally, Charles Hudon's spouse and babies go to watch his game in his arena quite often.

Beside this Charles Hudon is a pet lover. Talking about body structure, the famous NHL star is 5 ft 10 inches in height and weighs around 88 kg.

Charles Hudon Net Worth and Salary

Further, the NHL player has an average salary of $650,000 annually whereas Carey Price is the highest earner of the team with an annual salary of $10,500,000. Charles Hudon so far has made earnings of $773,930 from his entire NHL career.

Charles Hudon was born on June 23, 1994, in Alma, Quebec, Canada and the name of his parents is still unavailable. As per his nationality, he is Canadian and belongs to the White ethnic group. Further, his star sign is Cancer. He grew up along with his brother whose name is still to be revealed in media. 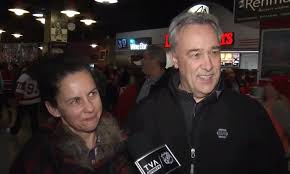 In his native Quebec, Hudon played his amateur midget hockey with the QMAAA's Saint - Eustache Vikings. He was drafted by the Chicoutimi Saguenéens to the Quebec Major Junior Hockey League, sixth overall.

He made his NHL debut and recorded his first NHL point on December 10, 2015, in a 3-2 defeat against Detroit Red Wings. Hudon recorded his first two NHL career goals in an 8–3 win over the Ottawa Senators on October 30 during the 2017–18 season.

Currently, he is playing along with his star teammates such as Jonathan Drouin, Max Domi and many more.