Chante L’amour Black commonly known as Chante black, a single mother child-initiated her basketball career from East Forsyth High School in Kernersville, North Carolin and most recently played as a center for the San Antonio Silver Stars of the WNBA.

Chante Black was born on November 12, 1985, in Austin, Texas. Her mother Mazie Black is a former American army but she decided to leave the army for the sake of her only child. Now, she is a teacher at Saudi Arab International School.

Chante Balck, a single mother-child, has already earned thousands of dollars from her basketball career. Her estimated net worth is close to $500 thousand. As a professional basketball player, she earns $30,000 per annum but is currently a free agent.

Besides, Chante is earning wealth from her crossover contracts and from league games in 2019. WNBA players earn $79,000 on average annually while the maximum salary caps at $117,500. DeWanna Bonner is considered as the Highest earning WNBA player with $127,500 as an annual salary.

The 33-year-old Chante is now engaged. She got engaged in 2015 but still, there is no report about her groom. On her Twitter's bio section, Chante has mentioned as "taken by @thechinkster" but the twitter account of her fiance is not available. 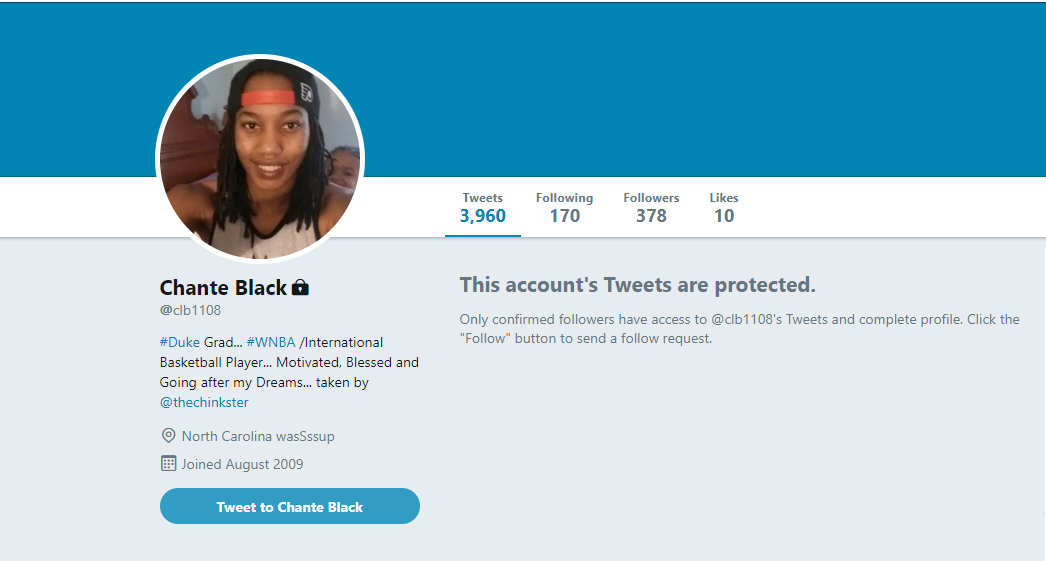 Chante is a shy person. She does not spend much time on social networking sites. It seems that she is only focused on her game. Her personal details are very secret and during her early career, there were no single rumors about her relationship.

She is a quiet woman as her Coach Joanne P. McCallie once described her as "She's not verbose. She's not a gabber, but when she speaks, people listen". She is succeeded to impress Adrian Snow who started to teach her physical education at Wiley Middle School when a tall sixth-grader walked into his class.

Being raised without a father is a hard thing to deal with but her mother was fully committed towards her daughter and she has promisingly raised her daughter.

It was 2004 when she got an appearance in WNBA High School All-American Game. 2005-2006 was the exceptional year for Chante Black, during this year she scored the highest point of her career which is still highest till this date.

Chante has spent her career on defense, her main position in basketball court is Center and she loves her game, and while she was standing on the other side, it became hard for opponents to score a point. Her long and strong pass makes her team so strong and she always manages to serve winning points for her team.