Celine Boutier is a rsing French professoinal golf player. She has been playing at the professional level since 2016. Boutier played under the LPGA Tour and Ladies European Tour and started her career with the Symetra Tour. Celine has already won six professional wins, including one LPGA Tour, two Ladies European Tour, two ALPG Tour, and two Symetra Tour.

Celine Boutier was born on November 10, 1993, in Clamart, France. She is among the three children born to Jacqueline Boutier and her husband, Christopher Boutier. Celine holds French nationality and is of Thai descent. She has a twin sister Christie who does not play golf and a younger brother Kevin. After graduating from High School, Celine enrolled at Duke University and majored in psychology and a minor in economics, and markets and management certificate. Boutier stands five feet and five inches tall and weighs 65 kg.

Celine Boutier has an estimated net worth of more than $1.5 Million. Boutier must have earned much of her net worth through her short career in golf and several endorsements and advertising deals. In the ongoing season of LPGA, Boutier has already made $311,508 as her prize money from ten events. 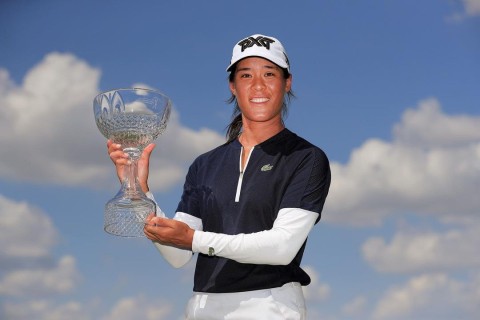 Celine made more than $100,000 in her rookie year from the Symetra Tour and was the third member of the 2017 Symetra Tour graduating class to exceed $100,000 in single-season earnings. The following season, She made $319,577 from twenty-five events. In 2019, Celine crossed the $1 million mark in career earnings when she took home $760,430 from twenty-eight events.

Who is Celine Boutier Dating? Know About Her Relationship Status and Boyfriend

Celine is very much private about her relationship status. She has not shared a word about her love life. Boutier is believed to be single as of 2021. The French player is very much early in her career and must be focusing on her career rather than spending time with people.

Celine is very much close to her family and her friends. She likes to visit new places and keeps posting her photos on her Instagram timeline.

Celine started playing amateur golf from the age of seven. She won the Skandia Junior Open Girls, Italian International Championship, and a few more in 2010 and won more than ten amateur events before turning professional in 2016. In 2017, Boutier won her first professional title at the Sanya Ladies Open.

The following year, Celine won her second Ladies European Tour at the Australian Ladies classic. In 2019, Boutier finished T5 in U.S Women's Open and 6th in the Women's British Open. The same year, The French player won her first LPGA Tour at the ISPS Handa Vic Open. Celine is at the T7 position in the ongoing Ladies PGA Championship, where Nelly Korda and Lizette Salas lead the board.