Casey Hayward is an American football quarterback who is signed to the Los Angeles Chargers of the National Football League (NFL). He finished his collegiate career at Vanderbilt. He was picked by the Green Bay Packers in the 2012 NFL Draft with 2nd overall pick where he played until 2015.

Perry, Georgia native, Casey Hayward was born on 9th September 1989, under the star sign Virgo. The thirty-one years old holds an American nationality and belongs to the Afro-American ethnic background. Regarding his physique, he stands 5 ft 11 in (1.80 m) tall and weighs 192 lb (87 kg). 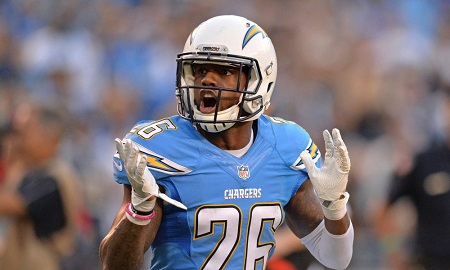 It is still unknown if Casey Hayward is married or single. There is less to no information regarding his personal life. Seems like the hunk prefers his love life behind the camera.

Scrolling through his Instagram, Hayward is a 'Baby Person". He has shared lots of pictures with his nephew and god-daughter.

Hayward was born to Casey and Tish Hayward. He started playing football when he was five. For high school, he enrolled at Perry High School where he led his team to the state quarterfinals by passing for 1,300 yards and 18 touchdowns as well as rushing for 1,284 yards and another 18 touchdowns as a senior. After graduation, he chose to play for Vanderbilt University.

In July 2016, Hayward's mother passed away due to breast cancer. The following year on 27th November, Hayward's younger brother, Jecavesia Hayward, died after a Toyota Camry where he was a passenger in crashed into a tractor-trailer that was stopped in the emergency lane on Interstate 75.

In the 2012 NFL Draft, the Green Bay Packers selected Hayward in the second round (62nd overall). He was the fifth cornerback selected that year. He made his professional regular-season debut in the Green Bay Packers' season-opener against the San Francisco 49ers and recorded one tackle in their 30–23 loss.