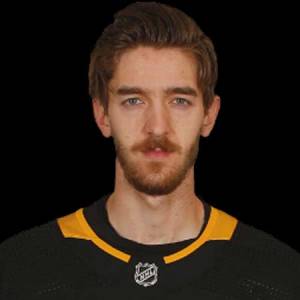 Matthew Murray or simply known as Matt Murray is a professional Canadian ice hockey player who plays as a goaltender in National Hockey League for Pittsburgh Penguins.

He was selected by the Penguins in the 2012 NHL Entry Draft in the third round and created history by becoming the first goaltender in  NHL history to win two Stanley Cups in his rookie year having won it in 2015 and 2016. He also holds the record for the most playoff win by a rookie goalkeeper with 22.

Matt Murray is of Candian nationality. He was born on  May 25, 1994, in Thunder Bay, Ontario, Canada. He started his early career with the hockey team of Thunder Bay Minor Hockey Association.

His father, Jim Murray was from Scotland who died in 2018 and mother, Fenny Seinen is from Holland. He also has a brother named Michael who is a guitarist in the Toronto-based band Earth's Yellow Sun.

During his youth playing career, he went to play several teams.

Matt Murray’s  Net worth and Salary

A star player for Pittsburgh Penguins, Matt Murray has earned a decent amount of money from his ice hockey career at the professional level. His net worth is not known and is still under review however according to sources, his salary in 2013 was estimated to be around $ 575,000.

After playing for several youth academies, he moved to the upper league and signed a three-year contract with Pittsburgh Penguins in 2013.

Upon his arrival at Penguins, he set a record for the longest shut outbreak streak without conceding a goal for a duration of 304 minutes and 11 seconds.

He also set a rookie record by goaltenders in the AHL and went to win the coveted Baz Bastien Memorial Awards as being the best goaltender and was selected to the AHL First All-Star Team and Rookie Team.

Murray made his  NHL debut for the Penguins against Carolina Hurricanes during 2015/16  and also made his NHL playoff debut by allowing a goal and scored his first playoff shutout against Rangers.

He was forced to miss the 2017/18 season when he suffered an injury due to being struck in the head by fellow team member  Olli Maatta. But, he returned back in February 2018 and went on to set a record for the longest playoff shutout break in Penguins’s history at 225:49.

He has also played for the North American team in the World Cup of Hockey in 2016 played in Canada.

Talking about his personal life, he is currently in a relationship with Christina Sirignano. The pair was thought to be dating since early days. the couple can be seen together in the Instagram photos from the very early since their high school.

A native of Thunder Bay, Ontario, Christina and Matt are from the same city which is the reason, how the couple met.

She is known to support her man and also known to fond of animals. They own Newfoundland puppy. They support groups such as Thunder Bay and District Humane Society.