Callum Eddie Graham Wilson, simply known as Callum Wilson is an English professional footballer who is currently signed to the Premier League side Newcastle United and the England national team. The striker previously played for the team like Coventry City where he lad loan spell with Kettering Town and Tamworth and AFC Bournemouth.

Coventry, England native, Callum Wilson was born on 27th February 1992, under the star sign Pisces. The twenty-eight years old holds an English nationality and is of Jamaican descent.

Besides, he earns much from his endorsement deal with Nike.

Callum Wilson is a married man. He tied the knot with his long-time girlfriend, Stacy. Callum met Stacey when he was 17 and she was 19. He claimed, marrying Stacey helped turned him into a success - by changing his diet. He told, "She introduced me to salads and healthy foods, and my injuries kind of slowed down after that."

The couple shares two children: a son named Oritse and daughter Orlagh. A matter of fact, the Wilson family is a low-key family. Additionally, the footballer is not active on Instagram.

Callum was born to a Jamaican father and an English mother in Coventry, United Kingdom. Unlike most British footballers, Wilson never had the ideal childhood life. His parents separated when Callum was still a toddler. Later, his mother had five other children, three sons, and two daughters. 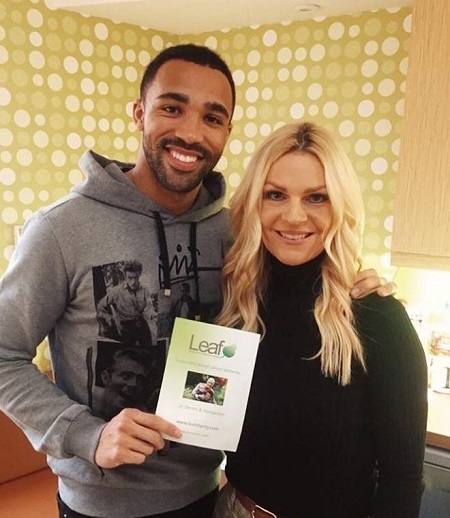 A youth product of Conventry, Wilson made his first-team debut on 12 August 2009 as a substitute in a 1–0 League Cup defeat to Hartlepool United. In December 2010, he made his league debut when he came on as a substitute against Queens Park Rangers. In 2011, he was loaned out to Kettering Town. After that, he was again loaned out to Tamworth (2011-2012). For the 2013-14 season, he returned to his parent club. Overall, he played 49 matches and scored 22 goals for Coventry City.

On 4 July 2014, Wilson signed to AFC Bournemouth. On his debut for the Bournemouth, he scored twice in a 4-0 victory over Huddersfield Town. He played six seasons for the team, appearing in 171 matches with 61 goals.

On 7th September 2020, Wilson signed to the Premier League side Newcastle United. On 12th September, he made his debut for the team, scoring the first goal in a 2–0 away win against West Ham United.