Burak Yilmaz is a Turkish professional footballer who is signed to Ligue 1 side Lille as striker as well as captains the Turkey national team. Turned professional since 2002, he played for Antalyaspor, Besiktas, Manisapor, Fenerbahce, Trabzonspor, Galatasaray, Beijing Guoan, and Trabzonspor.

How Much Is Burak Yilmaz's Net Worth In 2021? Salary & Contract

While at Besiktas, he made £28,000 weekly in 2020. Further, his deal with Galatasaray in 2012 consisted of €2.3 million seasonal wages with a €20,000 bonus per appearance. Overall, Burak earned no less than a seven-digit figure all these years,

Besides, he earns much from his endorsement deals with various brands, including Nike. As of 2021, his net worth is over $5 million.

Burak Yilmaz's Wife: Is He Married?

Burak Yilmaz tied the knot with Istem Atilla in 2015. The following year, the couple welcomed their first daughter, Nazli Yilmaz. Then, on 23rd August, their second daughter Derin was born. 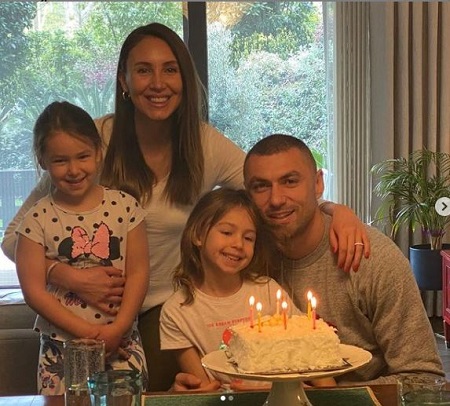 Burak Yilmaz with his wife and daughters  SOURCE: Instagram @by17

However, the duo reconsidered their decision for the sake of their daughter and began living together again after1 one year.

After Yilmaz proposed to his wife again, the two decided to get married for the second time.

An academic product of Antalyaspor, Burak Yilmaz was promoted to the senior team at 16. On 29 August 2004, he had his career's first professional goals in the 2004–05 season against Karsiyaka at Izmir Alsancak Stadium.

In January 2008, Yilmaz joined Manisaspor as part of an exchange deal, and later to Fenerbahce on 29 June 2008.

In February 2010, Yilmaz joined Trabzonspor on a permanent deal, where he played until 2012.

During his second stint at Besiktas, he scored 25 goals in 40 official games.