An American basketball player named to the WNBA's All-Rookie Team in 2019 is Brianna Turner who plays in the position of forward and she is currently playing with Phoenix Mercury. She has received an ESPYS award and was also honored with the NCAA award. 6-foot Brianna is specialized for rebounds and scoring points.

Born in Pearland, Texas on July 5, 1996, Brianna Turner is the daughter of Kellye Turner and Howard Turner. She finished her high school from Manvel High Schoo and finished her college from the University of Notre Dame. She initiated her WNBA career from 2019.

Brianna Turner a rookie tender who recently signed a three-year contract with Phoenix Mercury. She will reportedly earn $44,207 as an annual salary in 2019. Her actual property valuation has not been published yet but she has a total net worth around $400 thousand.

Her annual salary is $44,207 and she makes $3995 as her monthly income which makes her per week wage probably around $1300. The 23-year old player is an emerging player and so far her performance in the court has assured that she will become one of the greatest players in WNBA.

Young Brianna is still a little bit far from the fortune which she deserves but if we look into her games, it seems that she will go beyond the expectation of everyone.

Brianna Turner, a young and gorgeous professional basketball player, is married to Robert Wrightsman. As a young couple, it seems that Brianna and Robert are enjoying their married life but still there is no proper information about their marriage. 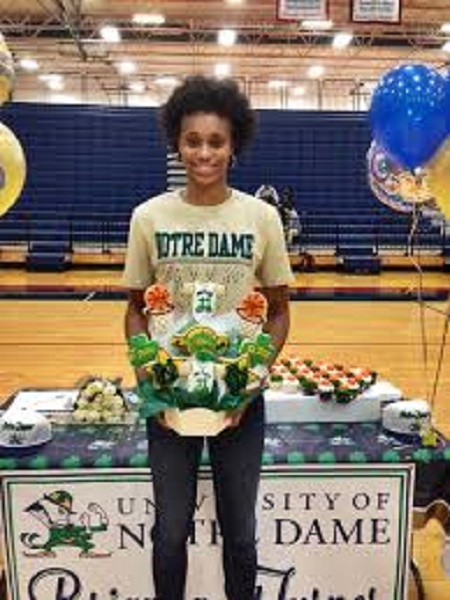 Though she is married now she is spending her time with Fun and joy. She loves to travel and she often does when is having offseason from her games. And she is a person who loves to spend time with her family and childhood friends.

Brianna started her WNBA career in 2019 but before debuting for WNBA she played with her college team. She studied at the University of Notre Dame in Notre Dame, Indiana for the Fighting Irish. she played very well for her team and it was her effort which makes it possible for Notre Dame to enter in 2017 NCAA Division I Women's Basketball Tournament.

It was the 2019 draft when in the first round she was picked up by Atlanta Dream and after that, she was immediately traded to Phoenix Mercury. In the same year, she was signed by Adelaide Lightning which is the Australian Women's National Basketball League. Besides her games, she has received an ESPYS award which is honorable for WNBA players and NBA players also.