Brianna Keisel the scholar of Pittsburg University is the famous WNBA point guard who has been the player of Tusla Shock, Atlanta Dream, Dallas Wing, and The Connecticut Sun. She holds a degree in administration of justice and in communication. The New work girl is currently playing with the Connecticut Sun.

Keisel was born on July 8, 1993, in Utica, New York. She started playing basketball from her high school Thomas R. Proctor and also played with the senior team of Pittsburg University. She was picked up 13th overall in round 2 by Tusla Shock in 2015.

Brianna has not shown remarkable performance in the WNBA and is reportedly a free agent at this moment. She was waived off by Sun in May after two months in the team. Earlier, she played for Atlanta Dream where she might have earned $30,000 annually.

The former Pittsburgh point guard reportedly has an estimated net worth of $200,000 in 2019. 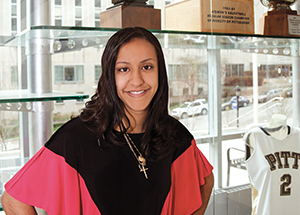 She has also played many overseas tournaments but she has not yet revealed her actual earning in front of the public yet. However, in 2015 when she signed a year contract with Tusla Shock, she earned $30,000 and in 2017 she began to play with Atlanta dreams where she signed $45,000 worth of contract.

The 26 years old WNBA star seems to be Single. She has no records of any previous marriage, engagement or affairs.

An American native point guard is spending her time improvising her game and she is totally devoted towards her career. Besides, she is deeply into fitness and has been training hard to keep herself healthy. Her Instagram is full of photos and videos of training.

The former Atlanta Dream player Brianna is a daughter of Steve Kiesel and Nikki Hymes-Kiesel. She has one sibling too whose name is Ona Kiesel.

Brianna is a third student-athlete from Thomas R. Proctor High School to play a sport at Pittsburg and before leaving her high school she set a record of  (1,723 points), assists (479) and steals (394).

She has an undergraduate degree in administration of justice and in communications but besides her qualification, she enjoys to help needy ones. In 2014, she went to Vietnam for a service-learning project where she taught math to middle-school children and coached basketball.

The 5 ft 7 in Guard has also completed volunteer work for the Pittsburgh Kids Foundation, for Big Brothers and Big Sisters of America and for the Children’s Hospital of Pittsburgh.

She became the part of overseas tournaments in  2015 when she signed with ASA Jerusalem which is  Israel based club and she scored averaging 13.9 points, 4 rebounds and 3.2 assists per game.

In n 2016 Brianna had debuted in Euroleague when Uni Gyor signed her as a guard. And under the banner of  Uni Gyor, she played in Prague league and  Hungarian League. She has also been part of the Hungarian League in 2017.