Brianna Decker is an American professional ice hockey player for the Calgary Inferno of the Canadian Women's Hockey League and the United States women's national ice hockey team. With the Boston Pride, she scored the first hat trick in NWHL history on 25th October 2015. Furthermore, she was awarded the 2012 Patty Kazmaier Award while playing for the University of Wisconsin.

Dousman, Wisconsin native, Brianna Decker was born on May 13, 1991, under the star sign Taurus. She holds an American nationality and is of white ethnic background.

Brianna Decker Net Worth & Salary In 2020

The significant source of Brianna Decker's income is her professional hockey career. As she is currently signed to Calgary Inferno of CWHL, Decker is paid between $2000 to $10,000 per annum as a salary. Back in 2015, she made $22,000 per annum as salary while playing for NWHL. 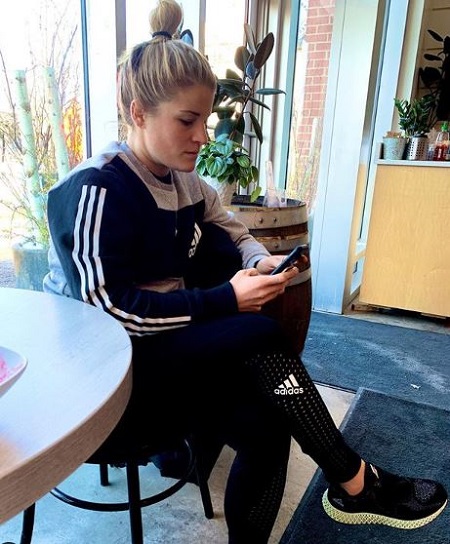 An Adidas athlete, Decker's endorsement must be lucrative. As of 2020, her net worth is no less than $0.5 million.

Decker, 27, is possibly single and unmarried. The women's ice hockey star has shared less to no information about her love life, not even her relationship status. Also, there are no records of her past love affairs or boyfriend.

Brianna Decker was born to John Decker and Marilyn Decker. She grew up alongside her siblings: Bryan Decker, Brody Decker, and Ben Decker.

Brianna Decker was interested in sports since her childhood. She played softball, soccer, hockey during her high school years.

On Sep 25, 2011, she scored her third career hat trick in a 13-0 win over Lindenwood Lady Lion’s ice hockey program. She managed to win the gold at the 2009 IIHF World Women’s U 18 Championship. She also participated and performed at the 2011 IIHF Women’s World Championship.

On January 17, 2015, she played her debut game for the Boston Blades. She builds up seven points (three goals, four assists) in an 11-3 win over the Brampton Thunder.

Signing as a free agent with the Boston Pride, Briana Decker created history on October 25, 2015. She scored her first hat-trick in the league history in a 5-3 win over Buffalo Beauts.

On 24th July 2018, Decker along with her teammate USA gold medalist Kacey Bellamy signed as free agents with the Calgary Inferno.