Brent Wallace is a Canadian TV reporter and host serving for TSN. Wallace was the youngest correspondent ever hired by TSN (24 years of age). Earlier in his career, he had a stint with Global Television Montreal (Agust 1997 - July 1998). To date, he covered few biggest sporting events in North America, including the Stanley Cup Final, NBA Finals, World Cup of Hockey, Grey Cup, The Presidents Cup, Champ Car, and the PGA Championship.

Fredericton native, Brent Wallace was born on 7 December 1973, under the star sign Sagittarius. He holds Canadian nationality and is of white ethnic background. He graduated from the Atlantic Broadcasting Institute in 1994

How Much Is Brent Wallace Net Worth In 2021?

It's been over two decades since Brent Wallace is actively servicing in sports journalism. Not only name and fame but the Canadian TV reporter has earned an enormous fortune out of his ever-growing career.

Since 1998, Brent is working for one of the renowned sports network, TSN. According to the source, the average salary of a sports reporter in Canada is $59,623. Since Brent marks almost twenty-three years at TSN, his salary is expected to be more than average.

As of 2021, Brent Wallace's net worth is approximately $1 million. Besides, there is no financial information available such as real estate or vehicles.

It's been many decades since we are seeing Wallace on-screen but his personal side is still under the shade. There is no information if the TSN reporter is married, in a relationship, or single. Thanks to his Twitter let us know that Wallace is a father. However, he has not disclosed information about his children.

Additionally, his socials Twitter (39K) and Facebook only display posts from his profession. He does not have IG. Basically, Brent Wallace is a low key person when it comes to his personal life.

Brent Wallace started his broadcasting career in 1994 at Global Television in Halifax. There he turned a nightly volunteer job into a full-time position covering news and sports in the Maritimes. Later three years he relocated to Global Television in Montreal where he had a role as a sports-photojournalist, producer, and host. There he was awarded the 'McGill-Concordia Media Award' for his coverage of university sports in the city. 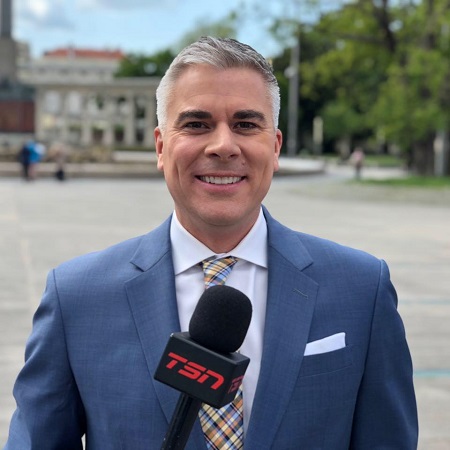 In August 1998, he was hired by TSN. What's more, that same year he won the McGill Concordia Media Award for coverage of university sports. His notable coverage includes Ottawa's Stanley Cup run in 2006, Big Brown's attempt for the Triple Crown in 2008, World Championships in 2009, and baseball's steroid scandal and hearings on Capitol Hill.