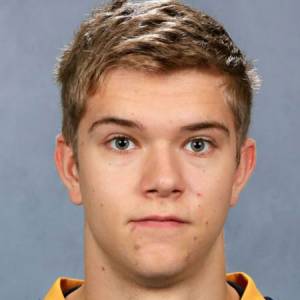 Brendan Guhle is a Canadian professional ice hockey player who plays in the National Hockey League (NHL). As of 2019, Brendan Guhle currently plays for the Anaheim Ducks as their Defence. Brendan Guhle has played for other teams like Buffalo Sabres.

As a Defence, Brendan Guhle reportedly earns around $925,000 as his yearly salary from Anaheim Ducks. Further, Brendan Guhle has an estimated net worth of over $1 million. Currently, he is in a romantic relationship with his girlfriend Victoria Spinney.

Hampus Lindholm is among the list of the highest paid players of the team since he earns an annual average salary of around  $5,250,000.

Brendan has an average salary of $925,000 annually and Guhle so far has made earnings of $2.775 million from his entire NHL career.

Besides Guhle financial earnings, his personal assets include home and cars. Moreover, he earns a good amount of money from various sponsorships.

Brendan is not married yet but is currently in a romantic relationship with his girlfriend Victoria Spinney for a very long time.

Brendan often shares photos with his girlfriend on social sites and also shows how happy they are with their affair.

Other than being a famous NHL Defence, Brendan Guhle is pretty famous in social media. The Famous NHL star is 6 feet 3 inch in height and weighs around 87 kilograms.

Brendan Guhle was born on July 29, 1997, in Edmonton, Canada to parents Mark Guhle but the details about his family life aren't available. As per his nationality, he is Canadian and belongs to the White ethnic group and his star sign is Leo.

Happy Mother's Day to the best mother anyone could ever ask for! Thank you for everything you've done over the years #mothersday

Brendan began his playing career with the Western Hockey League and later played with the Canadian Hockey League. After ending this career, he began his NHL career after being drafted in the 2015 NHL Entry Draft by Buffalo Sabres.

Guhle made his NHL debut in 2016 and played with the Sabres for over three seasons. Later on, he was traded to Anaheim Ducks on February 24, 2019. Currently, he is playing alongside some famous players including Ondrej Kase.