Tom Pernince Jr. is a well-established American professional golf player. He has been playing in the professional league for more than thirty-five years. Tom currently plays under PGA Tour champions. He has won thirteen tours in his professional career, including two PGA tours, six PGA Tour Champions, and five others.

Tom Pernice Jr. was born Thomas Charles Pernice Jr. on September 5, 1959, in Kansas City, Missouri. He has not uttered a single word about his early life and his parents with the public. His father worked as a barber. After graduating from High School, Tom enrolled at the University of California Los Angeles. Pernice stands five feet and ten inches tall and weighs 79 kg.

Tom Pernice Jr. has an estimated net worth of more than $15 Million. He has accumulated most of his net worth through his successful career in golf. Tom has earned the most from PGA Tour in his career. Pernice's best season came in 2006 when he notched seven top 10s and more than $2 million in winnings. Tom must be earning a handsome amount from his sponsors like United Airlines. ROI Networks. Antigua. FSquared, Titleist, etc. 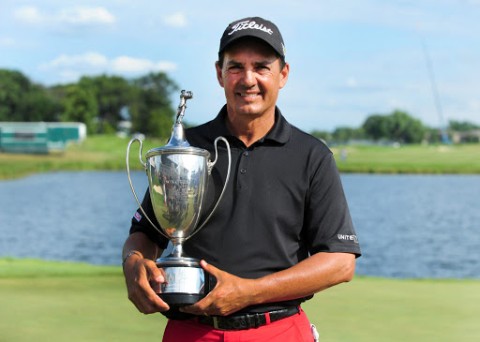 Totaling his career earnings from PGA Tour, it sums to $14,950,598. He earned the most from the International. Tom has played in 588 events in PGA Tours and is one of the highest.

Who is Tom Pernice Married To? Know About His Marriage Life and His Children

Tom Pernice is married to Syndey Pernice. The love birds have been married for more than twenty-five years. Not a single word about their wedding is shared. Shortly after the marriage, Tom and Sydney welcomed their two children, Brooke and Kristen. Their daughter, Brooke, is blind from her birth.  She was diagnosed with Leber's Congenital Amaurosis, an inherited retinal degenerative condition, and has never seen her father hit a golf shot.

Tom started his career from a very early age. He played golf for the University team and was a two-time All-American and Pac-10 Player of the Year in 1981. Pernice turned professional in 1983. It took him more than fifteen years to register his first PGA title. Tom won his first PGA title in 1999 at Buick Open and won his second in 2001 at The International.

Pernice moved to PGA Tour Champions and won his first title at SAS Championship in 2009. He won his second title in 2013 at 3m Championship. Tom won his last title in 2019 at Bass Pro Shops Legend of Golf. Although The golf player has played in more than seven hundred events, He is yet to win a major title.