Brandon Aguilera Zamora, aka Brandon Aguilera, is the highest-rated Costa Rican professional soccer star playing as a midfielder for the Liga FRD Club Guanacaste. He was sent on loan to Guanacasteca from Premier League club Nottingham Forest. Likeswise, he also serves Costa Rican, the national football team. In his soccer career, the youngster has clinched the achievements like Liga FPD, Apertura 2020, and CONCACAF League 2020.

Despite his early age,  the former Nottingham Forest jersey number 28 has an experience in several clubs, including Segunda Divison, Premier League, and Liga Promerica. Today, he has made his presence known for multiple clubs, including Nottingham Forest, Carmelita, Alajuelense, and Guancasteeca. Due to his promotion to a high-level league, he is known by most of the people in Costa Rica.

Brandon Aguilera is Naranjo, Costa Rica-based soccer player born on 28 June 2003. He is stiil a teengaer. In the meantime, he is just 19 years old and was born under the sun, sign Cancer. Costa Rica international is a righted-footed athlete. He is of Costa Rican ancestry with his nationality. He is a Christian by religion.

Well, meanwhile, Brandon has kept his family background details hidden. As a result, we are unaware of his family background. Eyeing his social media activities, he seems quite a reserved person. Besides that, he has remained silnet about his schooling and academic backgorund. We will edit our tabs on this as soon as it is public.

Brandon Aguilera Zamora possesses a height of 6 feet or 1.82m and weighs over 68 kg. His skin type is made of fair skin tone. He is a talented young soccer player with a well-maintained body, short blonde hair, and black eyes.

Brandon Aguilera, the former Carmelita youngster, started playing professional football in 2018. Carmelita is the first club from which he beagn his soccer journey. The teenager played four games at Carmelita, adding one goal to his name. The following year, he switched to Liga Promerica, signing an agreement with Alajuelense for four years. In his two years tenure at Alajuelense, he made a total appearance of 40, with one goal to his tally. 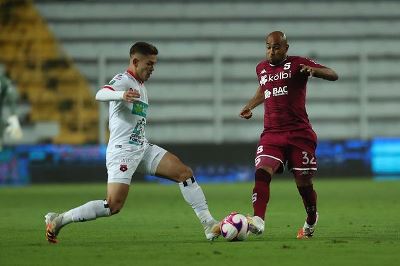 Later in the 2021-22 season, the club assured to send him on season loan to Guanacasteca, where he bagged four goals in 18 league appearances. Everyone was cognizant of his skills and prospect. Many European club had an eye on him. However, Nottington Forest makes its first moves by offering him a contract in 2022. Nevertheless, he was briefly loaned to his former club Guanacasteca without playing a single match for Nottingham Forest. For Guancasteca, he played his first game against San Carlos. After returning to Guanacasteca, the rising player has made a total of seven appearances for the team.

Analysis of his international stats

Net worth and career earnings in 2022

Brandon Aguilera is just 19 years old and still grinding hard for his successful career. We are unaware of the salary number received from his club, as the club has kept it to itself. However, we can guess his salary must be above that of any average player of Guanacasteca as he was a Premier League player and intermediate EFL players are way more than any league in the world. Per the report, his net worth in 2022 is believed to be around $500K. 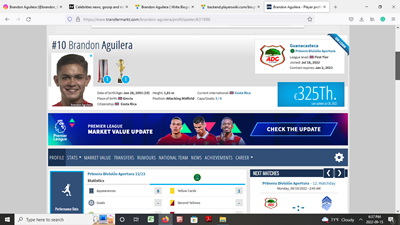 His trending market value in the Transfer market is €325K which is also his all-time highest worth. It will significantly rise shorl in accordance with your game performance and stats. No doubt, he is one of the probable future stars who have yet to make many fortunes from soccer.

What is relationship status?

He remains mute when it comes to his personal matter. Due to his low-key nature, the masses are unknown of his love life matter. Moreover, no photographs on his Instagram @brandon_10 guide him about his love life, so he is probably single. In addition to that, there is no recored of past relations or rumors about his love life which makes us believe that he is single. Instead, he is fully busy on his soccer career.