Boston Scott is an American football running back who is signed to the  Philadelphia Eagles of the National Football League (NFL). He finished his collegiate career at  Louisiana Tech. He was picked by the New Orleans Saints in the sixth round of the 2018 NFL Draft.

Baton Rouge, Louisiana native, Boston Scott was born on 27th April 1995, under the star sign Taurus. He is the son of Anthony Scott and Shelly Scott. The twenty-six years holds an American nationality and is of Afro-American ethnic background. He stands 5 ft 6 in (1.68 m) tall and weighs 203 lb (92 kg).

How Much Is Boston Scott's Net Worth In 2021? Salary & Contract

Boston Scott is currently under a 1 year, $920,000 contract with the Philadelphia Eagles, which features an average annual salary of $920,000.

In the 2021 season, Scott's base salary is $920,000. Fletcher Cox is the highest-paid roster of the Philadelphia Eagles.

Besides, he has a few sponsorship deals which earn him a decent sum.

Sorry ladies Boston Scott is off the market. The No. 35 – Philadelphia Eagles' running back is currently in a relationship with Mariah Rojas. 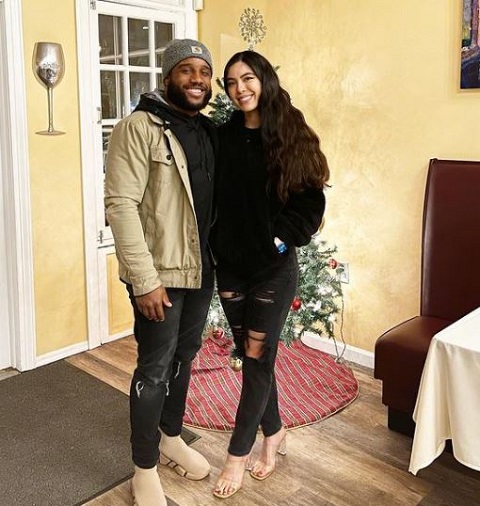 Scott made his relationship public on 2021 Valentine's day, posting an adorable picture with his bae. Similarly, his girlfriend also posted a picture on V day with his footballer beau.

Boston Scott enrolled at  Zachary High School where he played football for the school team. He was the leading rusher and earned local and state honors. Besides football, he was also a high school state champion in weightlifting.

Upon graduation, he attended Louisiana Tech, playing four seasons. Moreover, he was a watchlist candidate for the Wuerffel Trophy.

In the 2018 NFL Draft, Scott was drafted by the New Orleans Saints in the sixth round. On 10th May 2018, he signed his first contract with Saints. On 5th September 2018, he was waived after making the Saints' initial 53-man roster. He resigned to the practice squad.

On 10th December 2018, Scott has signed off the Saints' practice squad. On 31st August 2019, he was waived during final roster cuts, However, he was re-signed to the team's practice squad the next day.

On 11th October 2019, he was promoted to the active roster. Later sixteen days, he scored his first professional touchdown on a 4-yard run.

His 2019 season's performance earned him the backup running back position for 2020.