Blessing Okagbare is a well-known former Nigerian track and field athlete. The multi-talented athlete is also a long jump player and sprints. Blessing won a silver medal in the 2008 Olympics in Long Jump. Okagbare won the gold medal in the 2015 Commonwealth games for a 100 m race.

Blessing Okagbare was born on October 9, 1988, in Sapele, Delta State, Nigeria. She is the daughter of Margaret Okagbare and Francis Okagbare. Much about her parent's occupation and early life is under the radar. Okagbare completed her primary education and continued her professional career. Talking about her physical appearance, Blessing stands five feet and eleven inches tall and weighs 71 kg.

Blessing started training from her early days. She had an athletic physique from her early days, and her teachers and family encouraged her to take up sports. Okagbare started her early days playing football, but later her interest turned toward track and field. She participated in several disciplines early on, competing in the long jump, triple jump and high jump events at the Nigerian school championships. 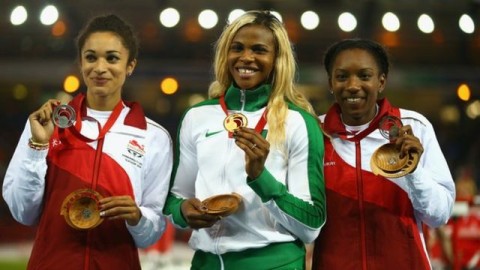 Blessing along with her gold medal at Commonwealth SOURCE: BBC

Blessing earned her first recognition in the 2006 World Junior championships. The following year, She was named into the national team and established a Nigerian record of 14.13 meters in the triple jump. In 2008, Okagbare was named to the Beijing Olympics team, and at the age of nineteen, She won the silver medal in the women's long jump. In the 2010 African Championship, The athlete won three gold medals in the 100 m race, Long jump and 4*100 m relay.

In the 2012 Commonwealth games, Blessing did not win any medal. She worked and trained very hard and earned her called in the 2013 World Championship and won a Silver medal in the Long jump and a Bronze medal in the 200 m sprint. In the 2014 Commonwealth, She won three awards, two golds in 100 and 200 m sprint and silver in 4*100 m relays. Blessing had a disappointing show at the 2016 Rio Olympics as Okagbare finished without a single medal.

Career End and Banned From Games

Blessing won her last medal at the 2018 Commonwealth Games. She competed in the 2020 Tokyo Olympics but was suspended after failing a drug test. In early 2020, Okagbare was banned for five years to use the prohibited substances and for another five years for not cooperating with the investigation.

Blessing is married to her longtime boyfriend, Igho Otegheri. The love birds exchanged their wedding vows in September 2014 at a private wedding ceremony. They had been dating each other for several years before their marriage. Some sources mention they have a daughter from their marriage, but none of them have ever said a word about their child.

Blessing Okagbare has an estimated net worth of more than $100,000. She has earned most of her net worth through her successful athletic career. Being an athlete, Okagbare must have received a handsome amount from her sponsorship and advertising deals.