Pittsburgh, Pennsylvania native, Bill Zito was born on 16th September 1964, under the star sign Virgo. The fifty-seven years old holds an American nationality and is of a White ethnic background.

Grew up in Milwaukee, Wisconsin, Zito enrolled at the University School of Milwaukee and subsequently one year at Phillips Andover Academy. Then he attended Yale University, where he played on the varsity ice hockey team from 1984 to 1987. Upon graduation from Yale, he studies law at the University of Wisconsin.

After graduation from the University of Wisconsin, Zito practiced at law firms in New York and Chicago. Further with his close friend Maekus Lehto, Ziro came up with sports agency Acme World Sports in 1995.

Acme World Sports was listed as the 8th highest-grossing hockey agency in the world in 2013. 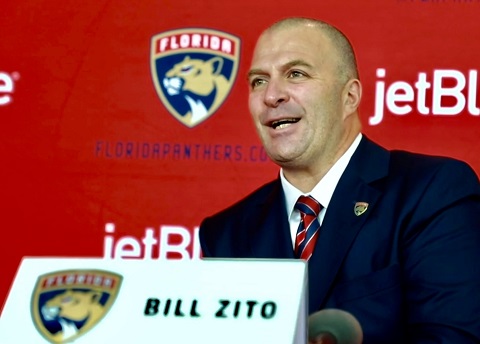 In August 2013, Zito joined the management organization of the Columbus Blue Jackets. In June 2015, he became the general manager of the Cleveland Monsters, the Blue Jackets' affiliate club in the AHL.

On 2nd September 2020, Zito was named the general manager of the Florida Panthers.

As a general manager of the Florida Panthers of NHL, Bill Zito has an annual salary of $1 million.

As a matter of fact, Bill Zito has been in the sports business since 1995.  He is a co-founder of Acme World Sports.

Bill Ziro is a married man. He tied the knot with Julie. The couple together shares twin daughters Frankie and Gigi and son Billy.