William J. Laimbeer Jr. well recognized as Bill Laimbeer is an American professional basketball coach and a former player who currently stands as the head coach of the Las Vegas Aces of the Women's National Basketball Association (WNBA). During his playing stint, he was known for his 11-year tenure with the Detroit Pistons in the NBA. Also, he played for Cleveland Cavaliers (1980-1982) and Basket Brescia Leonessa (1979-1980).

Boston, Massachusetts native, Bill Laimbeer was born on 19th May 1957, under the star sign Taurus. He holds an American nationality and is of white ethnic background.

As of 2020, Bill Laimbeer has an estimated net worth of $13 million. The significant source of his earning is basketball: initially as a player and now coach. As reported, his highest career salary was the $1.5 million he was paid in 1990 by the Pistons.

Currently, Bill serves as the head coach of the Las Vegas Aces of the Women's National Basketball Association (WNBA), where he reportedly makes no less than the six-digit figure per annum as salary.

Bill Laimbeer is a married man. He tied the knot with his girlfriend, Chris Laimbeer. Unlike other wags, Chris is far from the spotlight: she has always lived a low key personal life but sometimes appears during games. Not only Chris but the whole Laimbeer family including their children: son Eric and daughter Keri stay way from the limelight. 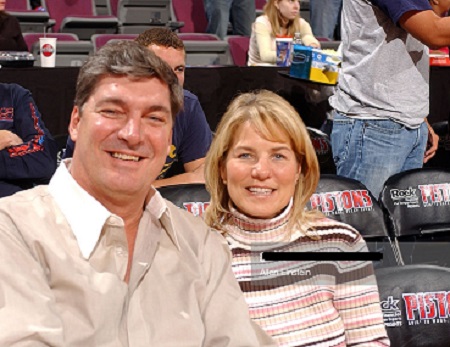 Bill was born to Mary Laimbeer and William Laimbeer Sr., who was an Owens-Illinois executive who rose as high as company president. He has a sister, Susan Laimbeer. Before joining the Notre Dame, he played a Sleestak on the children's TV series Land of the Lost. For college, he attended Notre Dame where he played basketball.

In 1979, Laimbeer was drafted by the Cleveland Cavaliers. On February 16, 1982, he was traded to the Detroit Pistons, where he spent the rest of his career. Notorious for his physical play and violent reputation on the court, he won NBA Championships consecutively in 1989 and 1990 with the Pistons and was named an NBA All-Star four times.