2012 SPORTS WRITER OF THE YEAR: Berry Tramel is a lifelong Oklahoman, sports fan, and newspaper reader who joined The Oklahoman in 1991 and has served as a beat writer, assistant sports editor, sports editor, and columnist.

Norman, Oklahoma native, Berry Tramel was born on inauguration day on 20th January 1961, under the star sign Aquarius. He holds an American nationality and belongs to the white ethnic background.

A life long Oklahoman, Berry Tramel is in the field since 1991. As of 2020, his net worth is estimated at $0.2 million. His source of income is widely considered his work as beat writer, assistant sports editor, sports editor, and columnist. 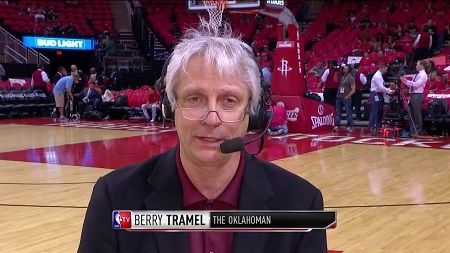 According to the source, the average salary of beat writer is $50,000 per annum. Besides, he also earns from his role as sports editor and columnist. He is belived to make $0.1 million per annum.

Columnist Berry Tramel is a married man. He tied the knot with his girlfriend, Tricia in 1980 in a secret ceremony. The couple shares a beautiful daughter, who is now married and has three children.

Berry and his spouse currebtly resides in Norman, near their daughter, son-in-law and three granddaughters.

Berry was has a twin brother. At the timed of birth, he weighed while his twin weighed 7-6. They were the biggest set of twins at Norman Municipal Hospital until sometime in the '80s.

Grew up in Norman, he rarely missed OU home games. Even, his father took them up to Stillwater for an occasional OSU game. Also, they hit Oklahoma City for the All-College basketball tournament and the 1977 NCAA regional in which Marquette won on its way to the NCAA title.

Berry decided he wanted to write about sports at a young age around 12 or 13. About the time he saw his first curveball and realized he had a lot better chance of writing about sports than he did playing them. In 1979, he graduated high school.

Grew up reading four daily newspapers: The Oklahoman, the Oklahoma City Times, the Norman Transcript, and the Oklahoma Journal, Tramel started the newspaper business at the age of 17, with the Transcript in 1978. His first game assignment was the Lexington-Elmore City high school football game, and he has enjoyed the journey ever since, from high school wrestling duals and regional track meets to Orange Bowls and the NBA playoffs.