Alex Avila, currently playing for the Arizona Diamondbacks, is an American professional baseball catcher. He has been playing with the team since his  MLB career debut in 2009. With his 10 seasons in the MLB, 31-year old Avila is reported to have earned the total of $22.9 million. However, his net worth at meantime is reported to be $5 million.

Besides his career achievements, Alex Avila is also enjoying his happy married life with his wife Kristina Perez Avila. The couple with their high school love story also shares 2 children. Curious to know more about the relationship between Alex and Kristina? Let's know all about Alex's married life, children, and his past affairs.

Married Life of Alex Avila and Kristina Perez, Their Relationship

Though the couple, keeping their love low-profile,  has not talked much about their relationship, the news of their engagement went out the way of secrecy.

However, Alexa and Kristina gave a shout-out after they took their datings a step further. Yeah, the couple got married on December 10, 2010, in the circle of family and close friends in Coral Gables, Florida.

But, sadly, the detail of their wedding is not out, neither the information of the guest list is disclosed. However, we do have the photo of the wedding moments shared by RUNWAY Salon & Spa via Facebook.

And it sounds really more adorable to know that the couple free from the mishaps of divorce or separation is deeply in love. THeir passion for one another is like the time they met for the first time.

Furthermore, the couple without the records of past affairs or relationship rumors is the parents of 2 lovely daughters. Let's know more.

Alex and Kristina, with more than 7 years of their marriage, besides being an idol couple, are also the parents of their daughters Avery Noelle and Zoey Gabrielle. It is reported that Alex was patiently awaiting the arrival of his first child, a daughter, while on his spring training on April 6, 2013.

He even revealed the name of his daughter and soon the couple welcomed their daughter Avery in the wee hours of Sunday morning, around 3:30 a.m. ET on April 7, 2013.

Thanks to Dave and @tigers organization for these beautiful flowers. Newest tigers fan can't wait for her first game pic.twitter.com/sbqcMBcxz4

2 years later, Alex became a father for the second time. Their second child, a daughter Zoey, was born on March 4, 2015.

Well, Alex and Kristina can be seen sharing really lovely family moments together.

Back in MI after a great week at home in FL. So much fun catching up with great friends and meeting some new ones! ?? pic.twitter.com/iY9ON8upfj

We had such a great time at Family Day today! What a great way to celebrate Fathers Day. #family #bestdadever pic.twitter.com/llFwADhcF0

The happy family reportedly lives in their house in Pembroke Pines, Florida.

Past Affairs and rumors of Alex Avila

As reported, none of the couple: Alex and Avila are reported to have had affairs in the past. Really, a simple and pure love relationship they are leading at present.

Well, reportedly Alex is from a sports family. His father Al Avila is the general manager and executive vice president of baseball operations of the Detroit Tigers; Alex formerly played for the team. Furthermore, his godfather Tommy Lasorda is former Los Angeles Dodgers manager. 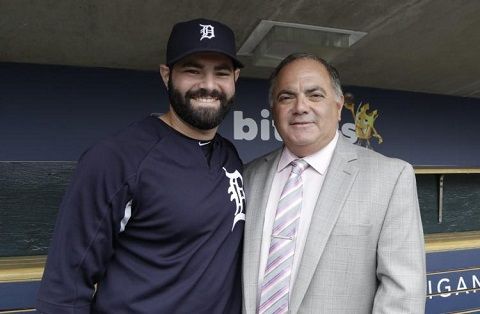 His cousin Nick Avila, the former Detroit Tigers with the 2011 MLB draft, is currently a coach for the Gulf Coast Tigers.

The Family really seem so interesting.