Barrett Sallee is a college football writer at CBS as well as a host on SiriusXM College Sports Nation. Active on sports media in 2001, he earlier worked for VSporto, Bleacher Report, Comcast Sports Southeast, and many more.

To know more about Barrett sallee from his bio to net worth to salary to married life, scroll down.

How Much Is Barrett Sallee's Net Worth In 2021?

It's been two decades that Barrett Sallee is actively working in sports journalism. As a college football writer at CSB Sports, he makes around $80,000.

Further, being a co-host at the College Football Kickoff on Bleacher Report Radio on SiriusXM 83 Saturdays 9-11 a.m. ET as well as other shows on the channel throughout the week., he makes another $50,000 per annum.

Barrett Sallee is a married man. Currently, he resides in Atlanta Area with his wife, son, and daughter.

Sallee has not revealed his all personal life to the media but is active on different socials: he often posts his family picture. 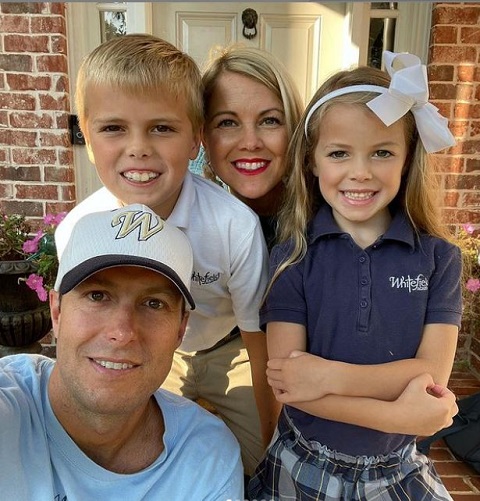 As per his socials, Sallee and his wife welcomed their first kid, a son. Their daughter is five years old now.

A native of the Atlanta area, Barrett Sallee holds an American nationality and is of white ethnic background. However, there is no information available about his parents, siblings, and childhood.

In 1998, he graduated from Wheeler High School. Further, he attended Auburn University, earning a degree in Bachelor of Arts, Mass Communication.

While still enrolled at Auburn University, he served as the media relations student assistant. Upon graduation, he landed a job at Fox Sports as a production assistant in 2002. Later three years, he became sports project manager at Concept Entertainment Group. Around the same time, he became a writer, editor, and radio analyst at Chicago Shamrox.

In October 2007, he was hired as the sports radio marketing specialist by Dickey Broadcasting. From 2008 to 2012, he was with SCOUT (Media) and CollegeFootballballNews.com.

The following year, he joined Comcast Sports Southeast where he provide analysis on SEC football every Friday night at 7 p.m. on CSS' SEC Football Tonight for a season. In 2015, he joined VSports, hosting a twice-weekly podcast called "SEC: Smothered and Covered," covering all things SEC football until 2018.

In 2012, Sallee joined the Bleacher Report as a lead SEC football writer as well as national CFB video analyst.

Since he hosts on SiriusXM College Sports Nation. Further, he is a college football writer at CBS Sports, a job he held since 2017.