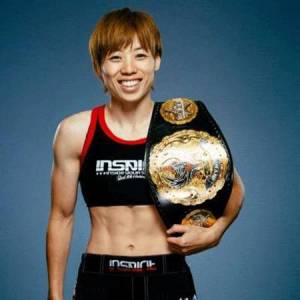 Ayaka Hamasaki was born on March 31, 1982. Her place of birth is Yamaguchi Prefecture, Japan. She is a Japanese by her nationality. Her ethnicity is Asian. Her astrological signs is Aries. She has been marvelous with her work. She has made her identity as a female kickboxer and mixed martial artists. She has competed in Shooto, Jewels in Japan and Invicta FC. She is the first Asian fighter who manages to win a North American premier MMA promotion title. She is one of the best female fighters in the world. The info about her parents and siblings are unavailable at this time.

Ayaka Hamasaki was raised in her birthplace. As she is a Japanese girl, from her early age of life she has shown keen interest towards judo and karate. She had practiced judo for 8 years. After receiving a degree from college, she started working in the office. After quitting that job, she started training in MMA.

On October 25, 2009, she made her MMA debut at Shooto Gig Central Vol.19 and managed to defeat Kinuka Sasaki via submission in the second round. On Dec 17, 2010, at Jewels 11th Ring, she fought with Sakura Nomura. The game was competitive between them. Eventually, Ayaka Hamasaki won the fight via unanimous decision. In the same event, she managed to defeat veteran Seo Hee Ham by unanimous decision. Later on, she competed at Invicta FC in the United States. She also had been undergoing with injury throughout her professional career. Ayaka Hamaski fought in submission grappling mini tournament that was held at Jewels 10th Ring where she defeated Emi Tomimatsu and Yuko Oya.

Ayaka Hamasaki has not celebrated her marriage with anyone. She is a private person and after being a super successful woman and popular one she has not disclosed her personal affair among her fans. Rumor says she is dating her boyfriend and currently they are in live-in relationships. She might be single as well or looking for her perfect husband to get settle in upcoming days. She is awesome at her job and if she will be going like this then she can be the best mixed martial artists of the world. She has never been part of any controversy. Some of her fans have confusion about her sexual preference. She is not a lesbian at all. Until now, she has not shown any keen interest towards charity and social work. She has given a perfect example of what a sportsperson should be like. Her admirers and followers can follow her footsteps to bag success.

Ayaka Hamasaki has an average height of 5 feet and 2 inch, which is around 1.52 m. Her weight is around 52 kg. As of now, she has not given any of description about her present salary and total net worth. Her fan followers can follow her on social networking sites.