Auden Tate is a professional American football player who plays as a wide receiver for the Atlanta Falcons of the National Football League. The athlete attended Florida state university and played his college football there. He has been playing in the NFL since  2018 after being drafted by the Cincinnati Bengals in the 7th round of the 2018 NFL Draft.

On 3 February 1997, former Cincinnati Bengals wide receiver was born in Irmo, South Carolina. His zoadic sign is Aquarius and he is 25 years old as of 2022. Talking about his physical appearance, Tate stands 6 ft 5 inches tall and weighs 103kg.

The Atlanta Falcons jersey no.19 Auden Tate belongs to the black ethnic background. He was born to his father Heanon Tate, and his mother Nicki Tate. He seems very closed to his parents. His parents have been the greatest encouragement and support in his football career.

He often goes to visit them whenever he is at leisure. He also shares their beautiful family photo on his Instagram.

Auden Tate, the receiver, had a keen interest in football from an early age. He has been a very active and sports person since his school days. After high school, The Falcons' wide receiver attended Florida State to play his college football, where he played from 2015 to 2017. He just played his junior level in his college and gave up his senior year to enter the 2018 NFL Draft. Tate has had 65 receptions and 16 touchdowns in his whole college career. 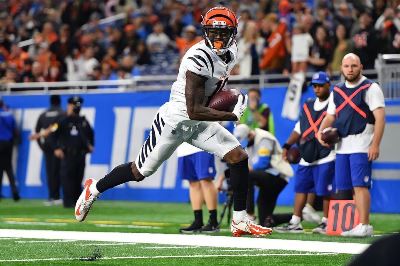 As a professional footballer, he set foot into NFL in 2018 after being picked by the Cincinnati Bengals. He was re-signed on the practice squad on 18 October 2018, and likewise, on 5 November 2018, he was promoted to the active roster. The 25-years footballer played four of his career for the Cincinnati Bengals. In his last season with the Bengals, he had a calf injury which placed him on injured reserve.

After releasing the Bengals, Tate decided to sign a year of free-agent contract with the Atlanta Falcons on 28 Marc 2022. He has an overall reception of 61, receiving yards of 799 and 2 receiving touchdowns.

The receiver Tate is a well-established footballer and a role model for many people. He has been massively crediting his bank balance via his NFL career. During his tenure at Cincinnati Bengals, Tate managed to collect $2,710,843. On 28 March 2022, he recently signed a $1,120,000 contract as a free agent with the Falcons, including an average salary of $1,120,000 per annum. Thus, Auden Tate's approximate net worth is $1Million to $5Million. Waiakea is one of his sponsors that he promotes on his social media account. For the promotion, he also gets an impressive amount of income, which boosts his net worth.

Read more interesting facts, trivia and news about other athletes at Playerswiki