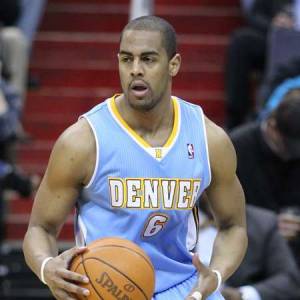 Arron Agustin Afflalo, celebrated as Arron Afflalo, is an American basketball player by profession. He is the player member for New York Knicks of the National Basketball Championship (NBL). He was born on October 15, 1985 at UCLA Medical Center in Los Angeles, California. He is the son of Benjamin Afflalo and Gwendolyn Washington, who got separate when he was just 3. He also has a sister named Paris.

Arron was very enthusiast about basketball since his childhood days. Arron grew up with his mother in Inglewood but he moved in with his dad during his high school. He did his schooling from Centennial High School where he helped the school lead to a California Division III title. Later, he joined University of California, Los Angeles (UCLA). During college he represented UCLA’s Bruins men’s basketball team.

He started his professional career in 2007 where he signed a contract with Detroit Pistons. Later in 2009, he was traded along with Walter Sharpe to the Denver Nuggets. He has also played for a couple of other professional basketball teams such as Orlando Magic, Portland Trail Blazers and currently for New York Knicks. The player has got a stats of 104 games played with the score of 14.8 points per game.

Afflalo has achieved many career highlights and achievement during the very short period of time. He has been entitled as the McDonald’s All-American, Pac-10 Player of the Year, AP Honorable-Mention All-American, NBA Shooting Stars Champion and many more.

Apart from Regina, Arron had some past affairs too. He was with Marina Ramos (Marina Steele, her former married name) who is also an actress by profession. With that relationship, he also has a daughter. However, the two split up and both are now happy in their own life.

Arron Afflalo has a net worth of $ 16 million and earns a very good salary of around $ 8 million annually. The shooting guard has a very attractive height of 6 ft. 5 in. carrying on with the weight of 98 kg.