Archie Griffin is a former American football running back, known for playing many NFL seasons with the Cincinnati Bengals. He also served as the president and CEO of the Ohio State University Alumni Association

Archie Griffin is the only college footballer in the history of college football to win Heisman Trophy twice. Griffin won four Big Ten Conference titles with the Ohio State Buckeyes and was the first player ever to start in four Rose Bowls. Even after years of his retirement, he has an estimated net worth of $3 million.

Archie Griffin Net Worth in 2019; How much is his Salary?

Archie Griffin is a former professional football player and as of 2019, Archie Griffin's net worth is estimated to be around $3 million. Currently, he serves as a BOD for Motorists Insurance, through which he earns a decent sum as salary.

After a tragic divorce with his former spouse, Loretta Laffitte Archie Griffin got married to Bonita Griffin. The lovely couple after having a short-lived affair with each other got married in 1987. 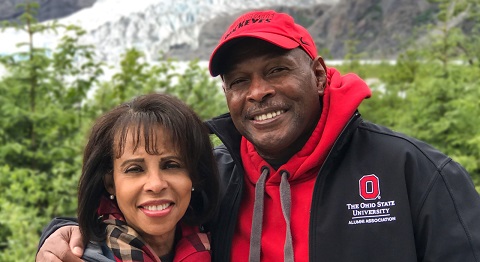 Since 1987, they have been living happily with each other. The couple has three sons together (Adam, Anthony, Andre). His son Andre served as an assistant football coach at Saginaw Valley State University. Further his son Adam also is one of the significant football players of Ohio State Football team.

Archie Griffin was born on August 21, 1954, in Columbus, Ohio, the United States to Margaret and James Griffin and grew along with six brothers and sisters. He is American by his nationality and his ethnicity is African (black).

Archie Griffin completed his schooling from Eastmoor High School. During his high school career, he was he held a record of 1787 yards and scored over 170 points in 11 games, including 29 touchdowns. Later in 1996, he was introduced into the high school hall of fame.

Archie Griffin went to Ohio State University from 1972-75. In his college career, Griffin rushed for 1,428 yards in the regular season as a sophomore, 1,620 as a junior, 1,357 as a senior. Further, Griffin is the only back to lead the Big Ten Conference in rushing for three straight years.

Overall, Griffin rushed for 5,589 yards on 924 carries in his four seasons with the Buckeyes (1972–1975), then an NCAA record. He had 6,559 all-purpose yards and scored 26 touchdowns. In their four seasons with Griffin as their starting running back, the Buckeyes posted a record of 40-5-1. So far, Archie Griffin is the only college footballer ever to win two Heisman Trophy.

He turned professional in 1976 after he was played 7 seasons in the NFL, and all with Cincinnati Bengals (1976-1982). After finishing his career with Bengals, he played with the Jacksonville Bulls of the United States Football League.