Anthony Stephane Bernard Modeste, simply known as Anthony Modeste is a French professional footballer who is currently signed to the bundesliga side FC Koln as a forward. At international level, he represented France U21 national team, earning 16 caps with 6 golas.

Cannes, France native, Anthony Modeste was born on 14th April 1988, under the star sign Aries. The thirty-three years old holds a French nationality and is of African ethnic background. He stands 1.87 m (6 ft 2 in) tall.

How Much Is Anthony Modeste's Net Worth In 2021? Salary, Market Value

Anthony Modeste is married to Maeva Modeste, with whom he shares two children: a son and a daughter. He often shares family pictures via IG. 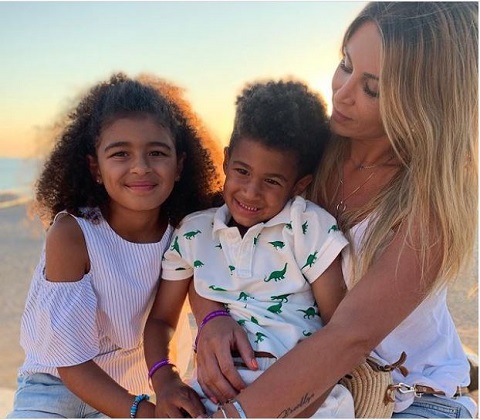 Unlike other wags, Maeva prefers a low key personal life. Also, there is not detail information about Anthony and Maeva wedding.

In 2007, Modeste was promoted to the Nice senior team. There he showed his huge potential with several very impressive performances for one so young. For 2009-2010 season, he was loaned out to Angers, where he scored 20 league goals during that season and also being named in the League's team of the season.

On 13 August 2010, Modeste signed to the  Bordeaux from OGC Nice, agreeing on a four-year contract with the club. For the rest of the 2011–12 Premier League season, he was loaned out to Blackburn Rovers on 13th January 2012.

On 31 July 2012, he signed on loan for Bastia, where he scored on his debut in a 3–2 win against Sochaux. His loan at Bastia was a huge success: he scored 15 league goals in the French top division also named Bastia's best player of that season.

On 9 July 2013, Modeste joined  TSG 1899 Hoffenheim on a three-year contract. On 3 August 2013, he made his club debut in the DFB-Pokal at fifth-tier SG Aumund-Vegesack, scoring two goals and assisting one. On 10th August 2013, he made his Bundesliga debut against Nurnberg, scoring a goal in the 2–2 draw. In two season, he almost gave 55 league apperances with 19 goals.

On 26 June 2015, Modeste signed fellow German club 1. FC Koln, signing a four-year deal. On 8th August 2015, he made his competitive debut where he scored a hat-trick in a 4–0 victory at SV Meppen in the first round of the DFB-Pokal. Just after 45 season, he scored his first goal, making it the fastest DFB-Pokal cup goal in the history of FC Koln.

On 16th August 2015, in his Bundesliga debut with Koln, Modeste converted a penalty. It earns himself after being fouled by goalkeeper Przemyslaw Tyton, for a winner at Stuttgart, while later assisting Yuya Osako for the final goal in a 1–3 win.

In 2017 mid-year transfer window, Modeste was linked with Chinese Super League side Tianjin Quanjian, but 1. FC Koln officially terminated discussions on 28 June 2017 while the two clubs failed to agree on certain terms during negotiations.

On 1 February 2021, Modeste joined Ligue 1 club AS Saint-Etienne on a loan deal until the end of the season.