Andy Kyere Yiadon, famously known as Andy Yiadom, is a professional football player from Ghana who plays as a right midfielder or right-back for the English Football League Championship (EFL) team Reading FC. Also, he is a member of the Ghana National team. The Ghana international Andy Yiadom is a box-to-box player that covers every blade of grass on the pitch.

He is an outcome of the Watford Football academy. Playing with the Hayes and Yeading United FC, he professionally set foot into football in 2010. He is one of the England-born Ghanaian ethnicity players competing in the EFL. He has played for numerous EFL teams such as Reading, Braintree Town, Barnsley, etc.

Andy Kyere Yiadom was born in 1991 in Holloway, England. Sagittarius is his zodiac sign. He lights up his birthday candles every 2 December with his loved one. The Ghana international aged thirty years old. For your kind information, Andy is a dual citizenship holder of England and Ghana. He is a truly devout Christian that shares Christian beliefs. He is a right-footed player.

He put on jersey number 17 for his club. The right-back for Reading FC is a 5 ft 11 inches or 1.80m tall black guy with a weight of over 75 kg. More description, he has a muscular body structure, short black hair, and a dark complexion.

Where are his parents from? Family background and members

Andy Yiadom was born in England to Ghanaian parents. Both of his parents are of African ancestry who later resettled to England, seeking a better life. However, there is no actual data regarding their migration to England.

The Reading Fc jersey no. 17 stays silent regarding his family details. So, their names and professions remain a mystery now. His family has a crucial role in his career as Andy obeys his family's decision to move to other clubs.  He has a sister whose details remain in the dark presently.

The Holloway-born soccer player kicked off his football journey at Watford Football Academy in 2008, where he trained and played his amateur career for two years. Andy used to engage in every athletic and sports activity that he came across.

Despite starting his career as a Youth Watford player, Andy Yiadom was not offered a contract at the end of the scholarship. Hence, he decided to sign with Conference Premier Club Hayes and Yeading United in the summer of 2010. Before moving to the fellow club Trainee Town in August 2011, he played just a season with Hayes and Yeading United, playing in 36 games. In the 2011-12 season with Braintree Town, he made an appearance in a total of 28 games scoring seven goals by January 2012. 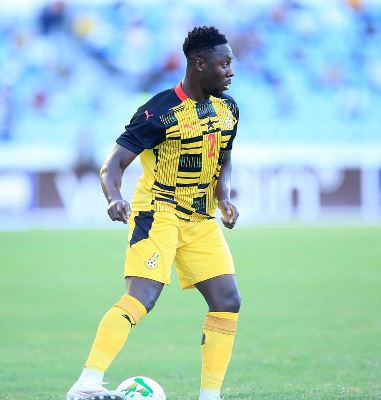 Later, the 30-year-old Black star was signed by the League two Club Barnet on 31 January 2012, agreeing on a four-year deal. Coming as a substitute player, Andy made his League two debut in the match against Shrewsbury Town on 31 January 2012. The midfielder scored his first goal for the Bees on the tenth of March. He served as a right-side winger with his teammate Ricky Holmes on the opposite side during his tenure.
Moreover, he was sometimes used right-back to replace Barry Fuller after the injury.

In his days at Barnet, the Ghanaian player added 14 goals to his tally playing 169 matches in his four-year deal. Before joining Reading FC, he appeared in 64 games of goalless for Barnsley. He was on the verge of joining Huddersfield and Swansea City, but unfortunately, he was ousted due to delayed transfer paper submission. The Conference Premier 2014-15 Champion joined Reading on 1 July 2018, agreeing on a four-year deal.

Ghana's international versatile defender capped a great 2021-22 season, triumphing him the Reading Payer of the season. Afterward, on 17 June 2022, he extended his contract for another three years with the club till 2025.

Before the Ghana national team, Andy was in the England C squad in 2015. He played in just four games, adding two goals to his tally for the team. Subsequenlty, his talent-spotted by the Ghana national coach, so he was called up to the team in 2016. Finally, in 2021, the prominent defender debuted on his senior Ghana National team in the 2021 Africa Cup of Nations. To date, he has played in 24 matches for Ghana.

What is his marital status? Love life and affairs

Andy Yaidom, the vital player for Reading FC, is a private peron who prefers to keep his love life to himself. He likes to maintain his life low-key; anything regarding his relationship status is unfamiliar to the public. In addition, there is also no buzz concerning his marital status, so we are uncertain about his marital status at the moment.

Researching his social handles, no post hints about his love life; thus, he is believed to be unmarried and may be single currently. Now, he is busy with his professional life. We will keep the tabs and update you as soon as possible.

What is Yiadom's net worth in 2022? Career earnings and market value

Andy Yiadom, commonly known as Andy, has been in this profession for over a decade. Starting his pro career in 2010, Andy has experience playing for several football clubs like Braintree, Barnet and many more. Playing for these clubs, he seems to be crediting his balance hugely. As per the salary sport, Yaidom's net worth in 2022 is around £1.23 million, including all his assets.

With th club Barnet in 2016, he made £33,800 yearly and  £1,82,000 per annum as a Barnsley player.  All credit to his talents and versatility of playing, he now nets a pay of £75,000 weekly and £3,90,000 yearly as a Reading player. Scott Dann topped the no one spot of the Reading FC's most earned players with a yearly wage of $1.95 million. Excluding football, he makes a pretty revenue from his sponsorship, brands and endorsement accords. However, the aggregate amount he acquires from those remains in suspense. 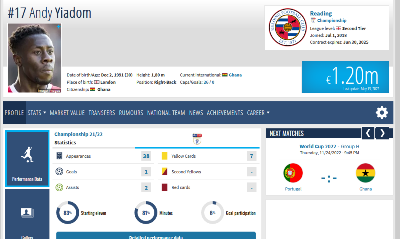 Regarding his market value, Andy Yiadom holds the trending market value of €1.20 million per transfermarkt. His all-time career-best market value was €4 million as of 28 June 2019. His contract with Reading will expire in June 2025.

Andy Kyere Yiadom is the most explored athlete on the internet in Ghana. He is a regular media user that operates his social media rationally. He is available on various social media platforms. Above all media, he is more actively involved on Instagram. His Instagram id is @andy_yiadom and featured with a blue tick.

His Instagram handle has 15.4K followers. Through these outlets, he maintains up-to-date sports news for his fans. Also, Andy enjoys interacting with his fans personally on his media handles. He repeatedly promotes his sponsorship and brands here.