Joe Golding is an American basketball coach who stands as the head coach of the Abilene Christian University, a position he held since 2011. The 2019 Southland coach of the year-earlier served as an assistant coach for South Garland HS, Seminole JC, Sachse HS, Collin County CC, Abilene Christian, and Arkansas-Little Rock.

Their Marriage Is Like A Fine Wine, Better With Age

Joe Golding and Amanda Golding is married for a long time now and share two adorable children: Cason and Chase. Giving a little more priority to privacy, the couple has not shared much information about their love story. Where did the duo meet? When did they start dating? Their wedding date and many questions are still unsolvable puzzles to others. Though lowkey, the Golding family is living a blissful life for sure.

With a momentous victory in the NCAA Tournament over Texas in March 2021, Joe had interviews with many. In every interview, he talked about his wife being very supportive towards him in every way. 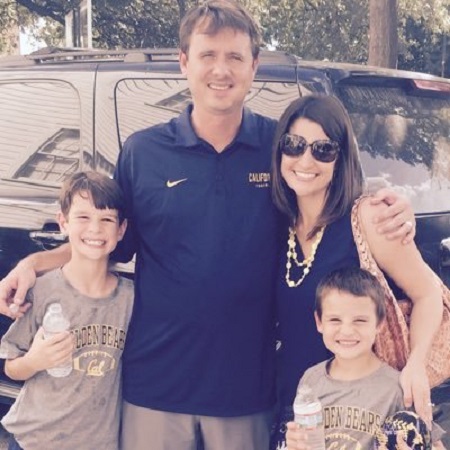 He also expressed his desire to celebrate the victory with his family. Since he is a college basketball coach, during the game Joe has to pay even more attention to his athletes which leads to distance with family.

"I haven't seen my wife or my kids in over a week now, so I've obviously missed them terribly. I wave at my wife out of the hotel window every day since she got here. This is, that's the tough part about being here. I wish I could celebrate with them because she's the rock of the family." Joe said.

Joe Golding's Wife Is a Teacher At Abilene High

The University of Texas graduate, Amanda Golding is a teaches Algebra II and Algebra I Pre-AP. She has been teaching at Abilene High School since 2010.

Unlike other wags, she remains out of the limelight but seen during the game cheering for her husband's team.

Joe Golding (October 15, 1975) is a basketball coach for the Abilene Christian University men's basketball team. He was a member of the Division I Southland Conference from 1968-73 and then dropped down to Division II's Lone Star Conference for a span of forty years (1973-2013).

Under his belt, the Abilene Christian Wildcats men's basketball has shown steady improvements each year since the team turns to Division I, completing the team's first winning regular-season since returning to Division I. a 16-15 in 2017-18 season as well as setting the all-time school record for Division I wins the following season.