A professional since 2014, she has competed in King of the Cage, Invicta FC, and The Ultimate Fighter.

Net Worth and Endorsement Of Amanda Cooper

Amanda Cooper has earned her wealth widely through her professional MMA fighting career. However, the exact figure of her net worth is under review.

Presently, she is signed to UFC which is also her significant source of earning as per now. Through her first UFC fight, she took home $22,500. 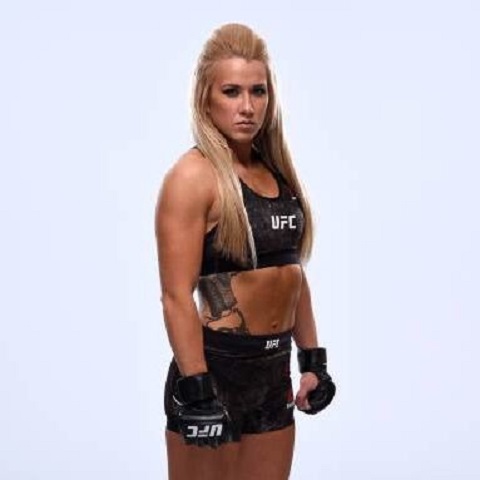 Amanda Cooper's Personal Life; Who is her Boyfriend?

Amanda Cooper, 27, is neither married nor single. Currently, she is involved in a romantic affair with her boyfriend, Anthony Barnes, a professional boxer. The champion couple is on the same journey of their professional life and seems to be much support to each other.

With @yourfavorite_ab watching the fights in Detroit tonight. #proboxing #Soundboard

Not only prosperous in their professional life, but the two also appears wealthy in their love life too.  Like other cheerful couples, they together visit mesmerizing holiday destination in vacations, has fancy dates and parties.  Also, their socials account are full of their adorable pictures.

A native of Bath, Michigan, United States, Amanda Cooper was born on 22nd of October 1991. Her birth sign is. By nationality, she is an American and belongs to White ethnicity.

King of the Cage

In 15th February of 2014, Amanda Cooper made her professional MMA career debut at KOTC Unrestricted where she faced Brittany Dugas. She won the fight via armbar submission in the second round.

Cooper second bout came on 12th of September 2015, against Aspen Ladd at Invicta FC 14: Evinger vs. Kianzad. She lost the fight via armbar submission in the round second.

In April 2016, Cooper was named as a contestant on The Ultimate Fighter: Tem Joanna vs. Team Claudia. In the opening qualifying round, she defeated Mellony Geugjes and earned entry into the house.

Nonetheless, she lost to Tatiana Suarez in the women’s strawweight final at The Ultimate Fighter; Team Joanna vs. Team Claudia.

On 19th November 2016, Cooper made her UFC debut at UFC Fight Night: Mousasi vs against Anna Elmose. Hall 2. She kissed the victory in her first UFC fight via unanimous decision.

In her next UFC bout, she got defeated by Cynthia Calvillo at UFC 209.

On 2nd December 2017, Cooper faced TUF 20 contestant Angela Magana at UFC 218. She won the fight via TKO in the round second, giving Cooper her first ever victory via TKO.

At UFC 224 on 12th May 2018, she was defeated by Mackenzie Dern. Further, she faced Ashley Yoder at UFC Fight Night: Korean Zombie vs. Rodríguez. She loses the bout via split decision.