Alvin Mentian Kamara commonly known as Alvin Kamara is an American football running back currently playing for the New Orleans Saints of the National Football League (NFL). He finished his collegiate career at the University of Tennessee and was drafted by the Saints in the third round of the 2017 NFL Draft.

A native of Norcross, Georgia Alvin Kamara was born on 25th July 1995, under the star sign Leo. By nationality, the twenty-five years old is American who came from the African ethnic background. Further, he stands 5 ft 10 in (1.78 m) and weighs 215 lb (98 kg).

How Much Is Alvin Kamara's Net Worth?

Alvin Kamara is single as of now. Earlier, he was in a relationship with Just Ace, a New Orlean-based stripper. The couple broke up in 2019. According to our source, the couple got into an argument and she took to her Instagram Story to vent. She tried to backtrack, but the damage had been done. 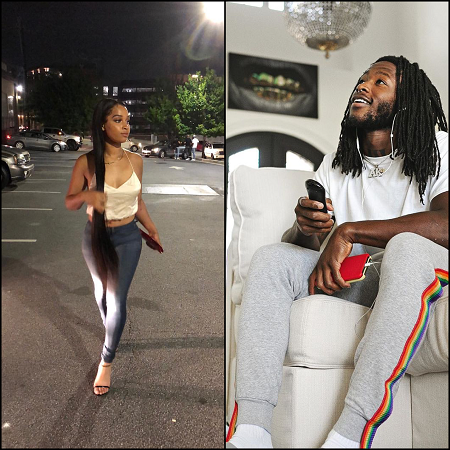 That’s not the only news. The source also claims Kamara made her sign an NDA because she’s a “loose cannon” that he fears will air all of his dirty laundry.”

Alvin Kamara was born to Adama Kamara, a Liberian who raised him as a single parent.

He enrolled at Norcross High School in Norcross, Georgia where he played for the Blue Devils football team. He rushed for 2,264 yards with 26 touchdowns, and he had 22 receptions for 286 yards and five touchdowns and led his high school to its first state championship.

Kamara was selected by the New Orleans Saints in the third round (67th overall) of the 2017 NFL Draft., becoming the fifth running back selected. Kamara debuted In the September 11 season opener against the Minnesota Vikings on Monday Night Football with seven rushes for 18 yards, four receptions for 20 yards, and one kickoff return for 26 yards.