Almoez Ali Zianalabedeen Mohamed Abdulla, popular as Amoez Ali, is a Sudan-born Qatari professional soccer player playing in the Qatar Stars League club side Al-Duhail. The Qatar International is positioned as a striker for the team. In addition to that, he also serves as a winger. Indeed, he is also the captain of the team. Despite being born in Sudan, Ali represented Qatar in global games and tournaments.

Almoez Ali, the skillful striker, initially played soccer in 2003 from Al-Mesaimeer when he was seven. He is a striker with an experience in several clubs such as Fc Pasching/LASK II, Lask, Cultural Leones, and many more. Moreover, his finishing and exceptional technique have gained him huge respect and a spot in his club and the nation's squad. For your info, he gave a trial in Belgian club Eupen during his youth career.

Almoez Ali's family name is Almoez Ali Zianalabedeen Mohamed Abdulla. He was born in Khartoum, Sudan, on 19 August 1996. Later on, his family relocated to Qatar, seeking a better life. To your knowledge, Ali was born and raised by Sudanese parents. Being born in Sudan, Ali holds the Qatari nationality and has also represented Qatar on an international platform. But Legally, he is also qualified to play for Sudan if he desires to.

He is a player with a dual citizenship card holder. Meanwhile, Almoez's age is just 25 years, and his star sign is Leo. Due to his self-centered character, he has upheld his family subject away from the media spotlight. Thus, there are no facts on his names and professions currently. Likewise, he is unspoken if he has any siblings by his side. His educational background is unknown now, but as per sources, he did his education in Qatar. Almoez is the striker-winger quite tall with a height of 5 ft 11 inches or 1.80m. He has well maintained athletic body structure. He weighs around 68kg. Furthermore, he has dark skin type and short hair.

Everything on Almoez Ali's soccer career

Ali was a very active individual since childhood. Shortly after migrating to Qatar, he went to Al-Mesaimeer to train and play his youth career. He was just seven years old at that time. After three years, he determined to join Aspire Academy in 2006 and played until 2013. Again, before moving to the Belgian youth system (Eupen), he made his presence for Lekhwiya for a year from 2012 to 2014.

After returning from Belgium, he professionally kicked off his career at FC Pasching/LASK II in 2015. After that, he was upgraded to senior Lask's squad agreeing on a season-year contract. Before LASK, he was on the LASK II, where he played four games and scored five. And for LASK, he registered his first career goal in the match against Floridsdorfer Ac on 27 November 2015. In fact, it is his only league goal. After his release from LASK in January 2016, he moved to Spain's third tier, the Segunda Divison B, joining Cultural Leonesa.

Furthermore, the professioanl holds the title of the only and first Qatari player ever to score a goal in the Spanish club. His record-holding goal came on in the clash against Arandina on 3 April 2016. Subsequentlmovedo moves back to his former youth club Lekhwiya SC for the 2016-17 season. He got his first Lekhwiya goal on 27 September 2016 in a 5-4 win against Muaither. He was quite quiet on and off on the transfer market. He had an amazing tenure there. The 25-year-old striker even won the best U23 player of the season club Lekhwiya SC clinched the Qatar Stars League title. There, he appeared in 25 matches sending the ball. 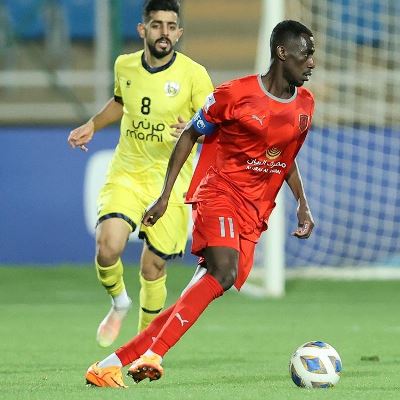 Eight times behind the net.

After Lekhiwiya SC merged with El Jaish, Ali, the skilled and prudent striker, decided to sign a contract with a newly born club Al-Duhail for the following season. Ali was a member of the unbeaten QSL title campaign. Reportedly, he has been playing 115 games for Al-Duhail, adding 38 goals to his tally. The winger led the team under his captaincy and was given jersey number 11.

Almoez began playing for Qatar in 2014 as a U20 player. Likewise, he made his presence known at U23 too. Later, the senior team head coach spotted his talent and quality and called him into the squad in 2016 for the first time. Coming off the bench, he made his international debut on 8 August 2016 in a game against Iraq. So far, he has played in overall 74 matches scoring 39 goals for Qatar.

Not to mention, he was a paramount member of the World cup qualifier match. His quality finishing and footwork have led his nation to win several games. Ali got everyone's intention when he scored the winning goal in the 71st minute against Oman in the world cup qualifiers. He is also on Qatar's FIFA 2022 World players list and all set to play his first World Cup in his home country. For his nation, he put the number 19 on his back.

So far, there are no facts or rumors on his love life matters, so he is assumed to be single. On his Instagram handle @almoezz, there is no post concerning his love life. Instead, it is full of his football-related photos. Thus, we can see how dedicated and focused he is on his career rather than being in a relationship. Moreover, Ali has seen not hanging out with any girl or companion; hence it makes us believe more he is single. AT present, he seems to keep his love hidden and might be pausing for the proper period for the reveal.

Salary, net worth and career earnings of Almoez Ali

Almoez Ali's finishing excellence and versatility have made him one of the most vital players for his nation and the club. His major source of income is from playing football. In his soccer journey, he has been part of numerous football clubs around the globe. As of the current year, Ali holds a market value of €2.80 million. His career's highest worth was €3 million on 4 April 2020. As Al-Duhail's team captain, he gets paid more than other players. 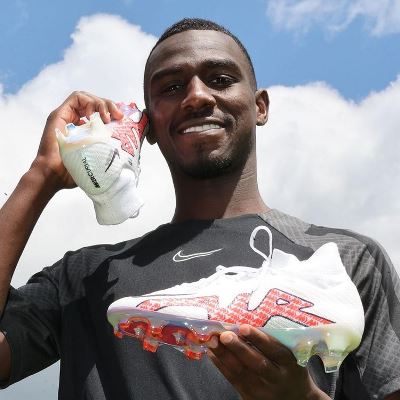 However, there is no actual remunerations number he gets, but an average Qatar Stars League salary begins from $88,000 per annum and $7150 monthly. Ali's net worth is $5 M in 2022. Not only that, but he also credits his ban balance from the bonus and payment from his national team. Besides football, he also makes money from different brands and commercial deals. Brands like Red Bull and Nike are his sponsors. The striker frequently publicizes its products on his Instagram, and he gets paid well in return.

However, the transaction is still unknown at the moment. In addition, Redbull and Nike facilities him with thier quality products like boots, jerseys, equipment etc.

Undoubtedly, Ali is one of the popular and explored players. We can easily access him on Instagram with the username @almoezz. With that username, Ali has 134K followers. He has a strong social media presence which he thoroughly takes as a prospect to advertise his brands, earning a handsome amount of money for that. He regularly updates his fans about his daily happenings and soccer activities.