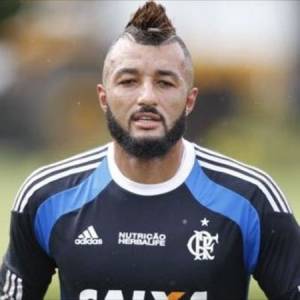 Alex Muralha is a Brazilian footballer who currently plays for Brazil national team and Flamengo as a goalkeeper. He started his career with Votoraty in 2010 and played for various clubs.

Born with a name Alex Roberto Santana Rafael on November 10, 1989, in Tres Coracoes, in a Brazilian family, Alex Muralha spent a long part of his life in Brazil. Regarding his nationality, Muralha is Brazilian.

Muralha is a graduate of Ensino Médio Completo.

Rising name in football, Alex Muralha began his football career by joining Votoraty in 2010, however, didn’t make any appearance for the club. He left the club in 2011 and joined Commercial-SP the same year.

Later, Muralha went to Oeste, Cuiaba and Shonan Belmare on a loan from Commercial-SP. He then joined Mirassol in 2014 for a couple of months.

Thereafter, Muralha joined a Brazilian football club, Figueirense FC. Muralha stayed with the club for a year and moved to the Brazilian sports club, Clube de Regatas do Flamengo and since then he is playing with the club.

Flamengo signed Alex with the fee $4 million. As of now, he has appeared in 39 games for the club. Later, he signed a new contract with the club on December 28, 2016, until December 2018.

Alex Muralha made his international debut in 2018 FIFA World Cup qualifying matches over Bolivia and Venezuela.

Alex Muralha got married to his wife, Tayrine Seifert. His wife Seifert is a model from Santa Catarina. He proposed his girlfriend in September 2016. Muralha personal life is as successful and perfect as his career. Before their marriage, they dated each other for a long period of time.  Muralha and Seifert has a romantic married life without any rumors of divorce.

Both of them has not buried in any love affairs and neither any news or rumors regarding their connection is floating in the air.

Brazilian professional footballer, Alex Muralha has not revealed his exact his figure of salary and net worth. Looking at his career, Muralha must have his net worth at least in six digits.

Alex Muralha is expected to emerge out as a hugely successful personality in the football fraternity in the year to come. Alex Muralha can maintain a good earning from his professional career. As of 2017, his market value is estimated at 3.50 million Euro. His salary might be more than a million at current.