Alex Meret is a rising Italian professional football player. He is currently playing as a goalkeeper in the Italian football league, Seria A for Napoli. Alex turned professional in 2015 playing with Udinese. Meret has represented Italy in numerous divisions.

Alex Meret was born on March 22, 1997, in Udine, Italy. He is the son of Arrigo Meret and his wife. Alex did not come from a reputed family, so much about his early life and his parent is under the radar. Information about his education and academic qualification is not shared with the public. Talking about his physical appearance, Alex stands six feet three inches tall and weighs 85 kg.

Alex Meret has an estimated net worth of more than $5 Million. The player credits most of his net worth to his successful football career. As per sources, Alex has an annual salary of £1,716,000 with Napoli. He has a weekly wage of £33,000. Kalidou Koulibaly is the highest-paid player for Napoli in the 2022 season, with a base salary of £9,516,000. 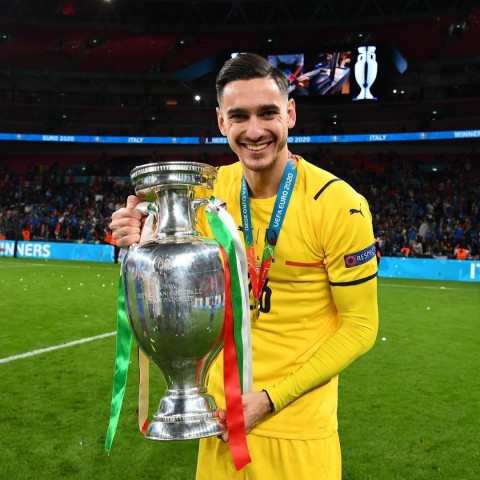 A football player has multiple sources of income, including sponsorship and advertising fee. In 2018, Alex signed a contract with Napoli for a reported fee of €35 million. Meret is very early in his career and will be making millions in the future.

Who is Alex Meret Dating? Know About His Girlfriend and Relationship Status

Alex is an active social media user and very open about his relationship status. Meret is dating his longtime girlfriend, Debora Romano. The duo has been dating each other for five years. They first posted a photo of them together in May 2017. The couple has not shared about their first meeting experience. Alex and Debora have been dating for some time but are yet to get engaged or tie their wedding knot. Debora is very supportive of her boyfriend and keeps attending his games.

Alex started his youth career with Donatello Calcio in 2007. He played and trained with the youth academy until 2012. The player represented the club in numerous divisions. Alex moved to Udinese and was promoted to the first team as second-choice goalkeeper in 2015. He made his senior professional debut against Atalanta in Coppa Italia.

Meret was loaned to SPAL for two seasons in the 2016 season. He appeared in thirty games for the club. His loan season was extended until 2018. After spending three seasons with the club, Alex signed with Napoli in July 2018. The player signed a five-year contract with a reported transfer fee of €35 million. In the 2019/20 season, Napoli won the Coppa Itala title.

Alex made his international debut with Italy in 2012 for the U16 team. The player appeared in four games and earned the U17 call the following year. Until 2019, Meret represented Italy to the U21 squad and made his senior team debut. He was part of the 2020 UEFA European Championship winning team.