Alexander Ross Dickerson aka "Grandpa" is an American Professional Baseball player who plays Left fielder for the San Fransisco Giants of Major League Baseball. He attended Poway High School and for his collegiate years, he enrolled at Indiana University. Dickerson was drafted by the Pittsburgh Pirates in the third round of the 2011 Major League Baseball Draft. He made his debut on 6 August 2015 for the San Diego Padres.

Ross was born on 26 May 1990 under the star sign Gemini in Poway, California, United States.

Alex Dickerson Net Worth in 2020: Contract details with the Giants in MLB

The California native has earned a total of $3,394,266 throughout his professional career. Furthermore, as a baseball player, he also receives sponsorship deals and endorsement deals that add a certain value to his net worth. From all of his earnings and deals, his estimated net worth is $1.5 million. 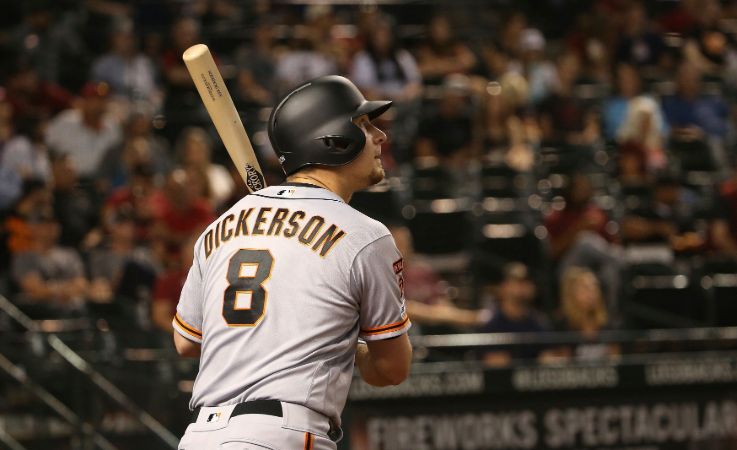 Alex Dickerson, No 8, for the San Francisco Giants SOURCE: The Mercury News

The 107 Kg Dickerson has been living a decent life with his professional career. Although his earnings might be low as compared to some of the highest-paid baseball players such as Mike Trout, Bryce Harper, and Giancarlo Stanton, he is still living a wonderful life with his wife.

Alex Dickerson's Wife: Who is he married to?

The 6' 3'' tall is married to the beautiful Jennifer Hoy. After dating for years, the couple finally decided to tie the knot in January 2020. They are expecting their first child in September 2020.

The couple is happily married without any controversies and affairs.