Alex Bregman is an American professional baseball infielder who currently plays for the Houston Astros of Major League Baseball (MLB). His professional MLB career started in 2016. He also attended Louisiana State University where he played baseball for three years. He bats right and throws right. He wore jersey number 2 while playing for the team.

How Much Is Alex Bregman Net Worth In 2019? Know His Salary and Contract

Alex Bregman is one of the recognized baseball players who has an estimated net worth of $10 million as of 2019. He earned fame due to his dedication and devotion to his career.

His total career earnings boosted his net worth.

Alex Bregman is neither married nor single. Currently, he is in a relationship with a lady named Reagan Howard.

Previously, he dated Hannah Cormier, however, they broke up sometime in late 2016 or early 2017. 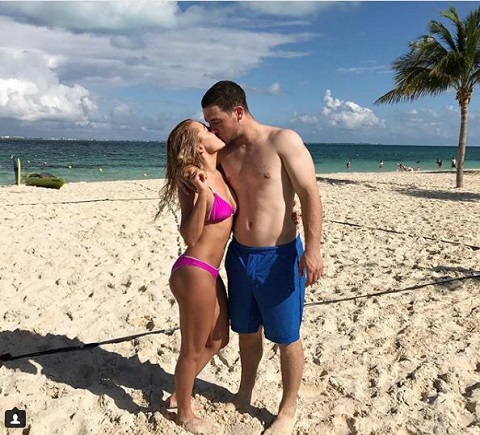 Alex Bregman has reached the age of 25 now. He has a perfect personality. He has a height of 6 feet and weighs 192 lbs. He is popular but never has been the part of the controversy. Apart from baseball, he has hobbies of fishing and adventure traveling. He loves continental foods.

Alex Bregman was born as Alexander David Bregman on March 30, 1994, in Albuquerque, New Mexico. He is Jewish. He is the son of Jackie Bregman (mother), and Sam Bregman.

Alex Bregman father and mother both are professional lawyers. He has two younger siblings whose name is Jessica, and Anthony. His father also played baseball for the University of Mexico Lobos. His father was also associated with the NBA Development League’s New Mexico Thunderbirds.

Alex Bregman started playing baseball at the age of 4. He was a batboy of the University of New Mexico. In 2004, he worked as a batboy against the Arizona State University. He attended Albuquerque Academy for his further education.

Albuquerque Academy provided him a perfect platform to raise his career in the world of baseball. In 2009, Alex Bregman leads his high school team to win the state championship. The year 2010 was incredible for him. Due to his remarkable performance, he became the first high school player to bag the USA Baseball Player of the Year Award.

Upon high school graduation, Alex Bregman attended Louisiana State University where he played baseball for his college team. In the year 2013, while playing for LSU, he sets many records. Due to his performance, he also wins the 2013 Brooks Wallace Award as the country’s best college shortstop.

His teammates include Gerrit Cole, Alex Bregman, and Yuli Gurriel.